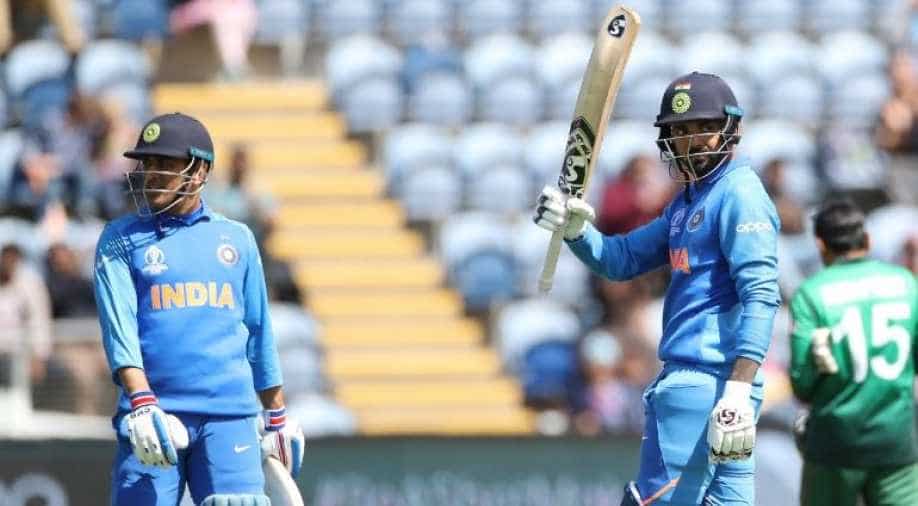 MS Dhoni(L) with KL Rahul(R) during the warm up game. Photograph:( Reuters )

'The biggest positive from today was the way KL batted at number four. He is such a class player,' Kohli said

India eased to a 95-run victory over Bangladesh in their final World Cup warm-up match on Tuesday after centuries from Lokesh Rahul and Mahendra Singh Dhoni helped them post a mammoth total of 359.

Bangladesh won the toss and opted to field first but, despite removing openers Shikhar Dhawan and Rohit Sharma cheaply, they failed to take advantage of bowler-friendly conditions in the morning session in Cardiff.

Indian skipper Virat Kohli scored 47 off 46 balls with five boundaries before Rahul and Dhoni added 164 runs in a fifth-wicket stand.

The partnership came to an end with the dismissal of Rahul, who finished with 108 off 99 balls with 12 fours and four sixes.

Rahul made the squad as a back-up opener but he is also competing for the number four spot alongside all-rounder Vijay Shankar and wicketkeeper-batsman Dinesh Karthik.

"The biggest positive from today was the way KL batted at number four. He is such a class player," Kohli said.

Former captain Dhoni reached his century off 73 balls and went on to score 113 before losing his wicket to left-arm spinner Shakib Al Hasan in the final over.

Bangladesh openers Liton Das and Soumya Sarkar made a steady start to the run chase before they were rattled by Jasprit Bumrah's double strike in the 10th over.

Sarkar was caught behind for 25 and Shakib perished to a perfect yorker for a first-ball duck.

Das (73) and Mushfiqur Rahim (90) offered some resistance with a 120-run partnership for the third wicket but they failed to step up the scoring rate against India's wrist spinning duo of Yuzvendra Chahal and Kuldeep Yadav in the middle overs.

Das was dismissed by Chahal in the 32nd over, triggering a batting collapse as Bangladesh went from 169-2 to 216-8.

Both Chahal and Yadav finished with three wickets each as Bangladesh were bowled out for 264.

Kohli was pleased with his bowling unit ahead of their tournament opener against South Africa on June 5.

"Bumrah got us the breakthrough and Chahal and Kuldeep got us six wickets," he said.

"In the second half (in the coming matches), the ball might turn a little bit but initially the ball will swing and seam, which will be the most important phase," Kohli said.