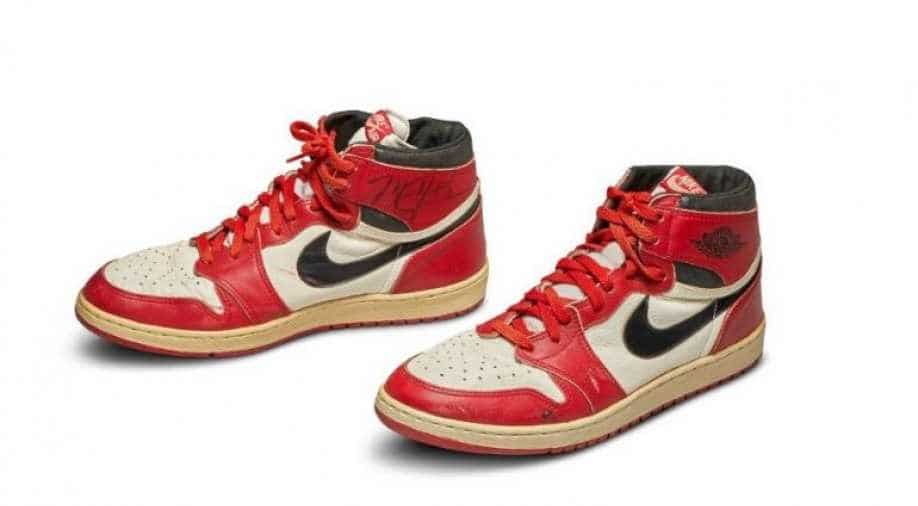 A pair of 1985 Nike Air Jordan 1s, made for and worn by US basketball player Michael Jordan, are seen in an undated handout photo ahead of an online auction by Sotheby's New York. Photograph:( Reuters )

Known for selling multimillion-dollar art, Sotheby’s held its first auction dedicated entirely to sneakers last year and had then set a world record of $437,500 for a pair of 1972 Nike running shoes known as the “Moon Shoe.”

“We saw tremendous bidding up until the moment the sale closed, with the value more than doubling in the final hour alone,” said Brahm Wachter, Sotheby’s director of eCommerce development.

“That coupled with strong international bidding from six countries on four continents shows not only the incredible appeal of Michael Jordan... but also that sneaker collecting is truly a global and growing market.”

Like most of Jordan’s basketball shoes, they are a mismatched pair in a size 13 (left) and size 13.5 (right).

The auction coincided with the 35th anniversary of the Air Jordan brand and the screening of the 10-part ESPN documentary “The Last Dance” about the Chicago Bulls and Jordan. The final two episodes of the show are set to air later on Sunday.

The shoes were sold by collector Jordan Geller, the founder of the sneaker museum Shoezeum in Las Vegas.