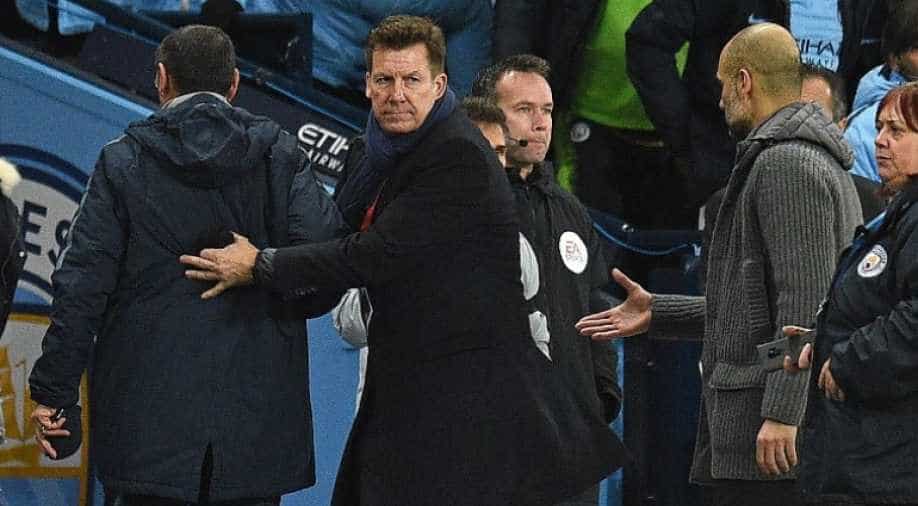 Sarri walked down the tunnel without shaking Guardiola's hand after Chelsea's 6-0 defeat.

Manchester City ruthlessly destroyed woeful Chelsea in a 6-0 win at The Etihad on Sunday to return to the top of the Premier League.

To add to that, Chelsea manager Maurizio Sarri complicated the situation, even more, when he walked down the tunnel without shaking Manchester City manager Pep Guardiola's hand.

While Guardiola and Sarri were both keen to play down any suggestions of a rift between the two managers.

Sarri insisted this was not due to having a personal problem with Guardiola.

"No I didn't see him in the moment but of course as usual I will go to say hello to him later, as usual. It was by chance, because I wanted to go to the dressing room, at the moment I didn't see him. I have not a problem with Pep (Guardiola)," said Sarri.

Similarly, Guardiola said he didn't have an issue with Sarri and spoke to Chelsea assistant manager Gianfranco Zola at full-time.

"I have a good relationship with him so no problem at all," said Pep Guardiola during the post-match conferrence.