Maurizio Sarri back, Ronaldo firing on all cylinders as Juventus head for Fiorentina 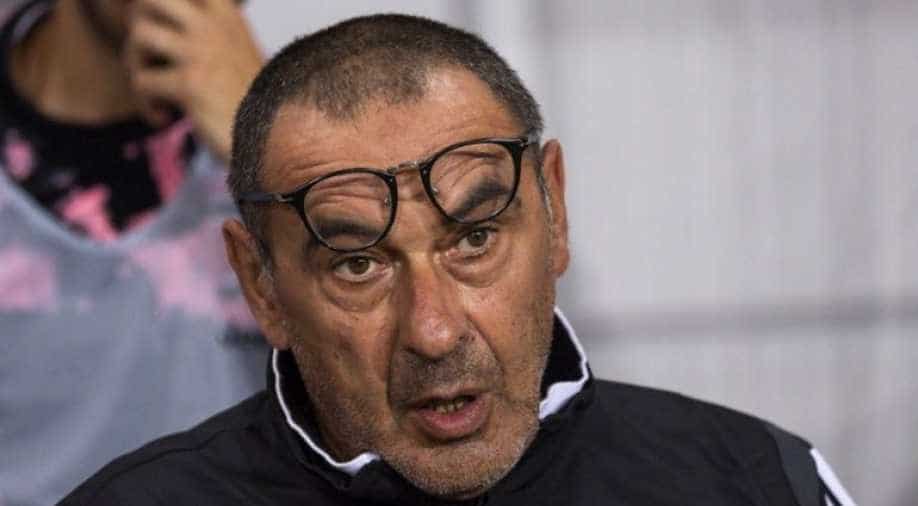 Cristiano Ronaldo returns to Italian league action after his four-goal spree for Portugal as Juventus head for Fiorentina on Saturday also boosted by coach Maurizio Sarri's highly-anticipated debut on the bench after a bout of pneumonia.

The ex-Chelsea coach missed his first two league games with the Serie A champions against Parma and his former club Napoli.

But the 60-year-old will be on the bench for the first time on Saturday as Juventus look to make it three wins this season before their Champions League opener at Atletico Madrid midweek.

Ronaldo's four goals in Portugal's European qualifying win over Lithuania during the week were enough to send shivers down the spines of Fiorentina fans.

The 34-year-old overtook Ireland's Robbie Keane as the all-time top scorer in Euro qualifiers, with 25 goals, and will be looking to impress further with the winner of the Best FIFA Football Awards to be named in Milan on September 23.

Ronaldo will lead the Juventus attack along with Douglas Costa and Gonzalo Higuain, the Argentine also in-form on his return to Turin after a loan spell at Chelsea.

"I'm back on the same team as Cris (Ronaldo) after a few years and he's even stronger, more complete and ambitious, I'm happy to play with him again," said Higuain, who played alongside Ronaldo on Real Madrid, said on Thursday.

Fiorentina have also changed owners and coach with former AC Milan and Sevilla manager Vincenzo Montella overseeing two defeats in as many games on his return to the club.

"Great stories are born of impossible challenges," said Montella, whose side last beat their fierce rivals in January 2017.

The rivalry has been fuelled further after Juventus wrapped up their eighth consecutive title with a 2-1 win at the expense of the Tuscans last April.

"I'd like to start a new chapter in Fiorentina's history by doing something special against Sarri's team," Montella told Gazzetta Dello Sport.

And Montella believes that new French signing Franck Ribery can make the difference for the team.

"Franck played the friendly against Perugia as if he was playing the Champions League final," he said.

"He's different, as Ronaldo is different. We talk of stars who excel through sacrifice. They are wonderful examples for everyone."

"It will be hard, very hard, but we're convinced that we will see a new great Fiorentina," said new Italian-American owner Rocco Commisso hoping to build a team who can add to their  Serie A titles in 1956 and 1969.

Carlo Ancelotti's Napoli, who are midtable, need to pick themselves up after Kalidou Koulibaly's own goal handed Juventus a 4-3 win in Turin last weekend.

But they play their first match at home this season against Sampdoria with doubts over whether their San Paolo stadium will be ready in time.

The Serie A outfit played their opening two league games away from home, at Fiorentina and Juventus, due to the reconstruction of the stadium.

Ancelotti said he was "outraged" after seeing the state of the changing rooms midweek with their Champions League opener against Liverpool next Tuesday.

The contractors have however insisted the work will be completed by Friday.

Inter Milan welcome Udinese to the San Siro also looking to extend their maximum points with Antonio Conte's side ahead of both Juventus and Torino  on goal difference.

Inter's new star signing Romelu Lukaku will be looking to score for a third consecutive game a week after monkey chants against the Belgian tarnished their 2-1 triumph at Cagliari.

Inter are also in Champions League duty against Slavia Prague at the San Siro on Tuesday and need to avoid a slip-up against Udinese who shocked AC Milan 1-0 in their season opener.

Torino host new boys Lecce, having also won their first two matches, as Atalanta head for Genoa before travelling to Dinamo Zagreb for their first ever Champions League game next week.