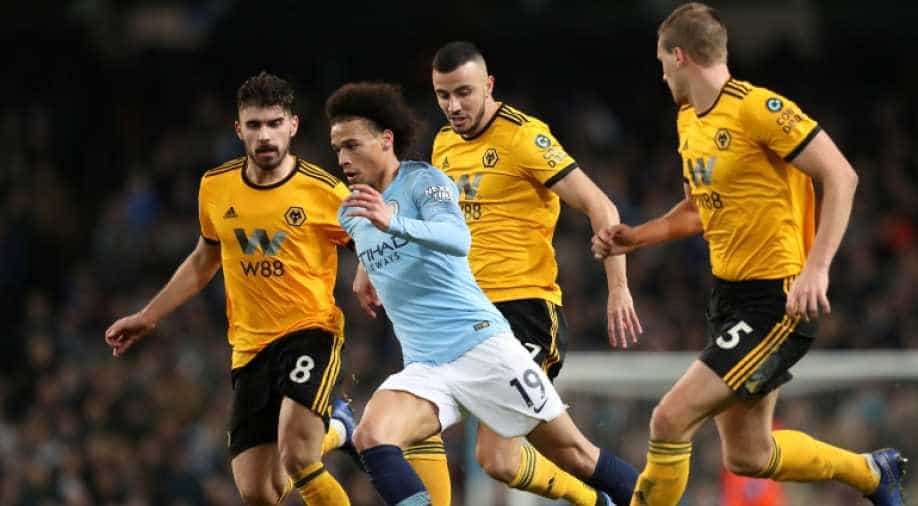 The Brazilian tapped in after 10 minutes and struck again from the penalty spot before the break after Wolves had been reduced to 10 men as Willy Boly was shown a straight red card.

The Brazilian tapped in after 10 minutes and struck again from the penalty spot before the break after Wolves had been reduced to 10 men as Willy Boly was shown a straight red card.

After back-to-back league defeats during the Christmas fixtures, City have now won five matches in a row in all competitions, racking up 24 goals in the process, and look primed to give chase to Juergen Klopp's Liverpool.

With Tottenham Hotspur losing on Sunday, it now looks a two-horse race to win the Premier League with Liverpool on 57 points and City on 53 from 22 games. Tottenham have 48.

"We have played a lot of time with 10 against 11 and we should be more aggressive in our attacking play, but we have a lot of matches in our minds and our legs," City manager Pep Guardiola, perhaps disappointed not to boost his side's goals tally further, said

"We were solid and didn't give away many chances so it is three points to keep the pressure on the team at the top."

City, who have now scored 99 goals in all competitions this season, knew only a victory would suffice after Liverpool's weekend win at Brighton & Hove Albion and they needed only 10 minutes to go ahead at the Etihad Stadium.

Aymeric Laporte played a superb pass to release Leroy Sane down the left channel and his cross was perfect for Jesus to score with a simple finish in front of goal.

What was already a tough assignment for Wolves became a seemingly impossible one nine minutes later when Boly launched into a tackle on Bernardo Silva and won the ball but also left the City midfielder rolling around with his follow through.

Wolves had a rare breakaway and perhaps should have equalised when Raul Jimenez burst forward and played in Jonathan Castro Otto who just failed to pick out the unmarked Jota when a shot at goal would have been a better option.

Shortly afterwards at the other end Raheem Sterling was sent sprawling in the area by Ryan Bennett and Jesus converted the penalty and there was no way back for Wolves.

To their credit Wolves were diligent in defence after the break and restricted City's chances although they did concede again when substitute Kevin de Bruyne whipped in a cross that glanced in off Wolves' Conor Coady.

City racked up 870 passes to the 271 of Wolves and such was their control that keeper Ederson joined in upfield during one passage of play in the second half.

Wolves remain in 11th spot and boss Nuno Espirito Santo had no complaints, agreeing with the decision to send off Boly.

"Not only the red card changed the game, but the way we conceded with a long pass," he said.

"The red card makes the task much harder. You know it is difficult to stop them but you try to avoid certain situations and it was a 30-yard pass so we must improve. But you do not make a game plan with one less man."