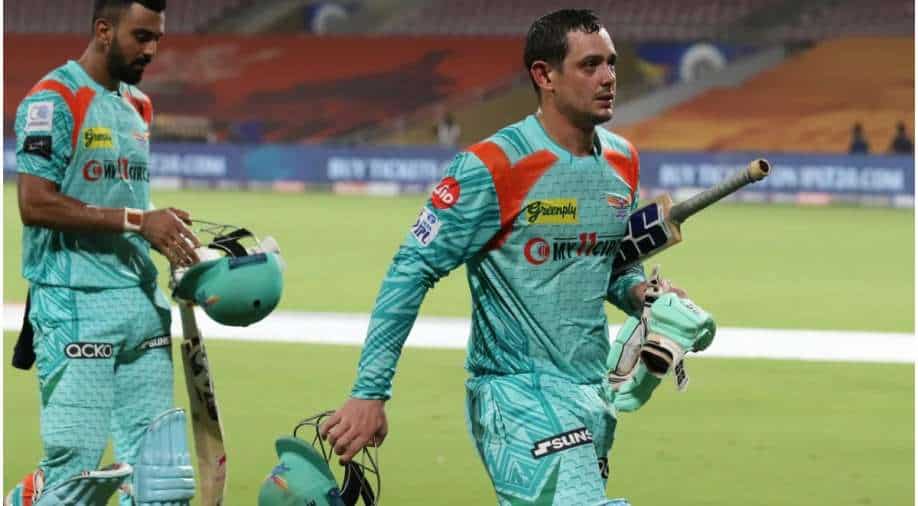 LSG vs KKR: Courtesy KL Rahul and Quinton de Kock's brilliance, this also became the first time a team has batted the entire 20 overs in IPL without losing a single wicket.

It was raining sixes and runs for the Lucknow Super Giants (LSG) after they opted to bat first versus the two-time winners Kolkata Knight Riders (KKR) in match 66 of the IPL 2022 edition, on Wednesday evening (May 18), at the Dr. DY Patil Stadium, Mumbai.

Riding on South Africa's Quinton de Kock's mammoth 140 not out and captain KL Rahul's well-compiled 51-ball unbeaten 68, LSG put KKR on the back foot on a batting-friendly track to take the team total to 210-0 in 20 overs. While De Kock was the aggressor, scoring 71 runs alone since the start of the 16th over, with 10 fours and sixes each -- at a whopping strike rate of 200 -- Rahul played his part and also struck at 133.33

This also became the first time a team has batted the entire 20 overs in IPL without losing a single wicket. Here are some other records achieved by the LSG openers and De Kock, in particular, who slammed his second IPL hundred:

Meanwhile, Rahul also became the first-ever Indian batter to cross the 500-run mark for the fifth successive IPL season. He is now only behind Delhi Capitals' (DC) opener David Warner, who has done this in six consecutive seasons.

At the mid-innings, LSG head coach Andy Flower told the broadcasters, "It's a helluva score, they batted beautifully. We've been seeing some special batting from both of them this season and again that was brilliant to watch. They are both beautiful batters to watch. At the end of the 18th over, we sent a message on saying, 'If you guys are too tired hitting the ball hard, you can retire and we'll send some of our big-hitters in." These boys, all of them, from 1 to 9 can hit the ball hard like that. One boundary is a big boundary, so Quinton hitting balls like that, who's not renowned for his big-hitting actually, that'd have given him a lot of satisfaction."

KKR need to chase down the total in 16.5 overs to bolster their NRR (and go past DC's NRR, i.e. +0.255) and also remain in the playoffs race. Meanwhile, LSG already have one foot in the playoffs and will like to win big to not only confirm a last-four berth but also help them to ensure a top-two finish eventually.