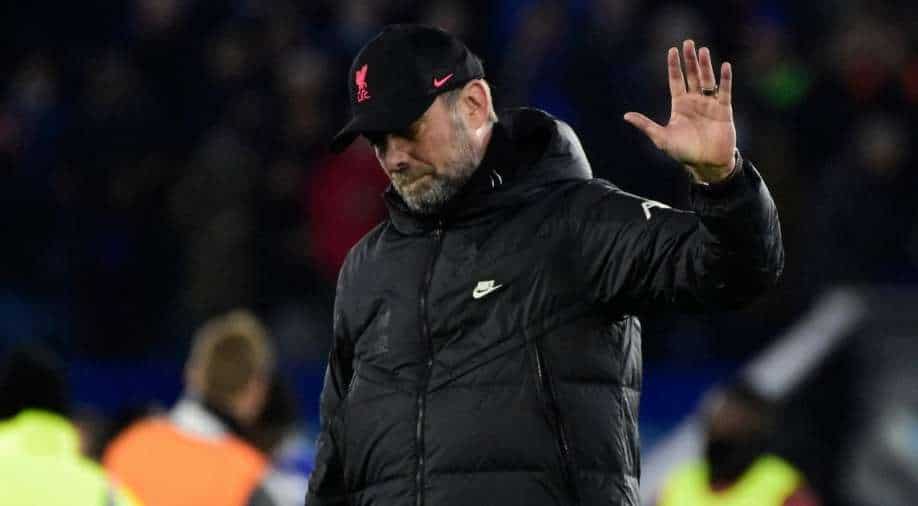 This is a file photo of Jurgen Klopp. Photograph:( Reuters )

In case Klopp's test result is confirmed positive, he will also miss the League Cup semi-final first leg at Arsenal on Thursday

Jurgen Klopp will miss the crucial Premier League clash between Liverpool and Chelsea, which is scheduled to take place on Sunday (January 2) after a suspected positive coronavirus (COVID-19) test, the club informed in a statement.

As per the club's statement, the Liverpool manager reported mild symptoms ahead of the match and he is now isolated and in his absence, assistant manager Pepijn Lijnders will lead the team.

"The Reds manager, who reported mild symptoms ahead of the fixture, is now isolating. Assistant manager Pep Lijnders will therefore lead the team for the 4.30pm GMT kick-off at Stamford Bridge," the statement added.

No further positive cases have been revealed after testing the entire first-team set-up within the playing squad in addition to the three confirmed by Klopp. However, three backroom staff members have returned suspected positive results.

In case Klopp's test result is confirmed positive, he will also miss the League Cup semi-final first leg at Arsenal on Thursday.

It is important to note that the Premier League has been ravaged by Covid outbreaks since December, with Liverpool's game against Leeds on Boxing Day postponed due to virus issues suffered by their opponents.

In total, 17 English top-flight matches have been postponed due to Covid so far, while Arsenal manager Mikel Arteta missed Saturday's game against Manchester City after a positive test.

Jürgen Klopp will miss our meeting with Chelsea on Sunday after returning a suspected positive COVID-19 test result.