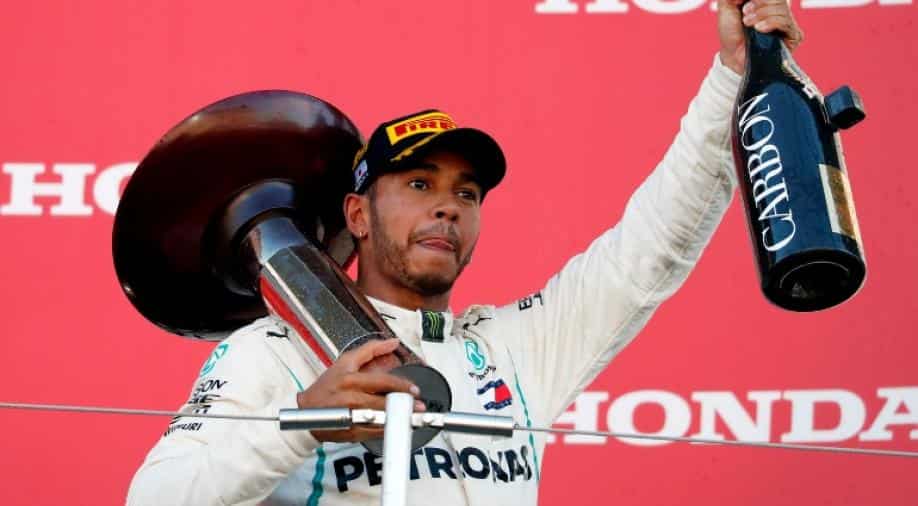 Ferrari's Sebastian Vettel, the Briton's closest rival, finished only sixth after an early collision with Red Bull's Max Verstappen left the German fighting back from 19th place in a damaged car.

Lewis Hamilton won the Japanese Grand Prix in a Mercedes one-two on Sunday to take a 67-point lead in the Formula One championship and stand on the brink of a fifth title.

Ferrari's Sebastian Vettel, the Briton's closest rival, finished only sixth after an early collision with Red Bull's Max Verstappen left the German fighting back from 19th place in a damaged car.

If Hamilton wins the next race, the U.S. Grand Prix in Austin and one of his favourite tracks, the 33-year-old will be champion with three races to spare in case Vettel finishes lower than second.

"We've gone from strength to strength as a team this year. Austin is generally a good track for us and I can't wait to unleash this beast there," said Hamilton after leading every lap from pole position.

The victory was the 71st of his career, leaving him only 20 behind the record of seven times world champion Michael Schumacher.

Hamilton now has 331 points to Vettel's 264, while Mercedes lead Ferrari in the constructors' standings with 538 points to 460 for the Italians.

Vettel, who had started eighth after a failed tyre gamble in qualifying, collided with Verstappen while trying to pass on the inside for third place at the fast left-handed sweep of Suzuka's Spoon corner.

Vettel spun around and resumed at the back.

Verstappen was already carrying a five-second penalty for earlier running wide and forcing Ferrari's Kimi Raikkonen off the track and would have dropped behind Vettel anyway at the pitstops.

"The touch with Sebastian...in that corner you can't overtake. I even gave him space but he understeered into my car," said Verstappen.

Ferrari boss Maurizio Arrivabene said the podium had been within Ferrari's grasp.

"I know the situation looks impossible but our job is to challenge the impossible, this is what we are going to do in the next four races," added the Italian.