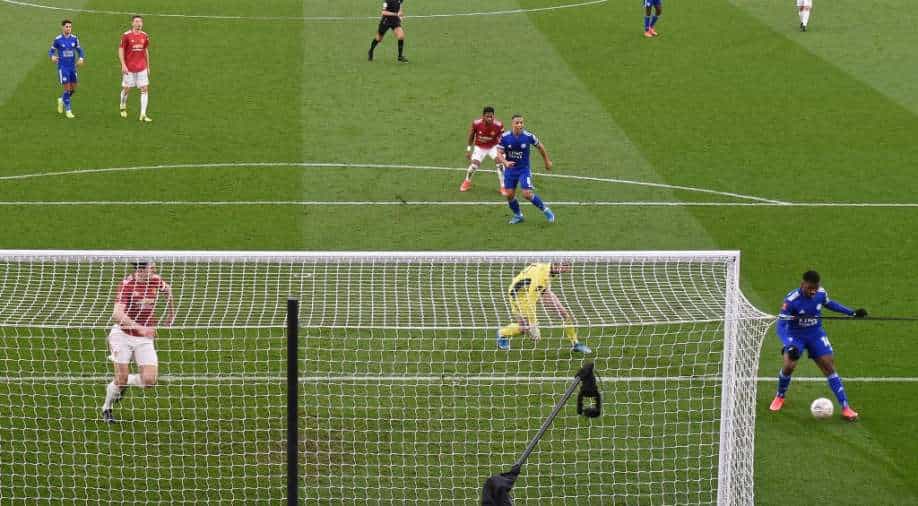 Leicester sent Manchester United crashing out of the FA Cup as Kelechi Iheanacho's double sealed a 3-1 win, while Chelsea will face Manchester City in the semi-finals after beating Sheffield United on Sunday.

Leicester sent Manchester United crashing out of the FA Cup as Kelechi Iheanacho's double sealed a 3-1 win, while Chelsea will face Manchester City in the semi-finals after beating Sheffield United on Sunday.

Brendan Rodgers' side can look forward to meeting Southampton in their first FA Cup semi-final since 1982 thanks to Iheanacho's predatory finishing at the King Power Stadium.

He put Leicester ahead in Rodgers' 100th game in charge before Mason Greenwood equalised late in the first half.

Youri Tielemans restored Leicester's lead and Nigeria striker Iheanacho wrapped up only their second win over United in 23 years and their first since 2014.

Leicester, who have never won the FA Cup and last reached the final in 1969, will head to Wembley to face Southampton in April.

"I'm obviously delighted. It was a great performance. Every aspect of the game was complete," Rodgers said.

"We showed courage to play against one of Europe's greatest teams. I told the players they were three games from history. Now it's two."

United's limp exit ended their run of 29 away games without defeat in all domestic competitions since losing at Liverpool in January 2020.

Without a trophy since the 2017 Europa League, that competition is now their last realistic chance of winning the first silverware of boss Ole Gunnar Solskjaer's reign.

"We didn't have the spark but it's understandable. We played every three days and been on a great run. It just caught up with us, all the games and travels," Solskjaer said.

"Thursday in Milan was a big night and took a lot of out of us physically. We didn't have the extra zip, authority and confidence today.

"We've got the Europa League and Premier League to concentrate on. Yes we would've liked to go to Wembley but now all the focus is on the games we do have."

After reaching the Europa League quarter-finals with a win at AC Milan in midweek, Solskjaer made five changes and United's reshuffled line-up never looked comfortable.

Fred paid the price for a woeful mistake in the 24th minute.

When Harry Maguire played a risky ball out to Fred on the edge of the United area, the Brazilian's panicked response was a weak back-pass towards United keeper Dean Henderson.

Iheanacho nipped in to intercept it before rounding Henderson and tapping into the empty net to make it eight goals in his last nine games.

United equalised in the 38th minute when Pogba's cross was cleverly dummied by Donny van de Beek and Greenwood slammed his shot past Kasper Schmeichel from 12 yards.

Lacklustre United were still out of sorts and Tielemans put Leicester back in front in the 52nd minute.

The Belgian midfielder advanced unchecked as United backed off and he took full advantage with a fine low finish from the edge of the area.

Iheanacho killed off United in the 78th minute with a clinical header from Marc Albrighton's free-kick.

At Stamford Bridge, Thomas Tuchel's much-changed side were below their best but still earned a potentially thrilling showdown with quadruple chasers Manchester City by beating Sheffield United 2-0.

Oliver Norwood's 24th-minute own goal, the midfielder turning Ben Chilwell's shot into the net, put them on course for the last four.

The Blues are back in the FA Cup semi-finals for a fourth time in the last five seasons after losing last year's final against Arsenal.

Chelsea won the last of the club's eight FA Cups under Antonio Conte in 2018.

"We had a good first half where we controlled everything. We lost control in the second half. After 14 consecutive matches I could feel we were tired and we made many little mistakes," Tuchel said.

Since replacing the sacked Frank Lampard in January, Tuchel is unbeaten in 14 games in all competitions.

Chelsea have kept 12 clean sheets in that period, shutting out the opposition in their last seven matches.