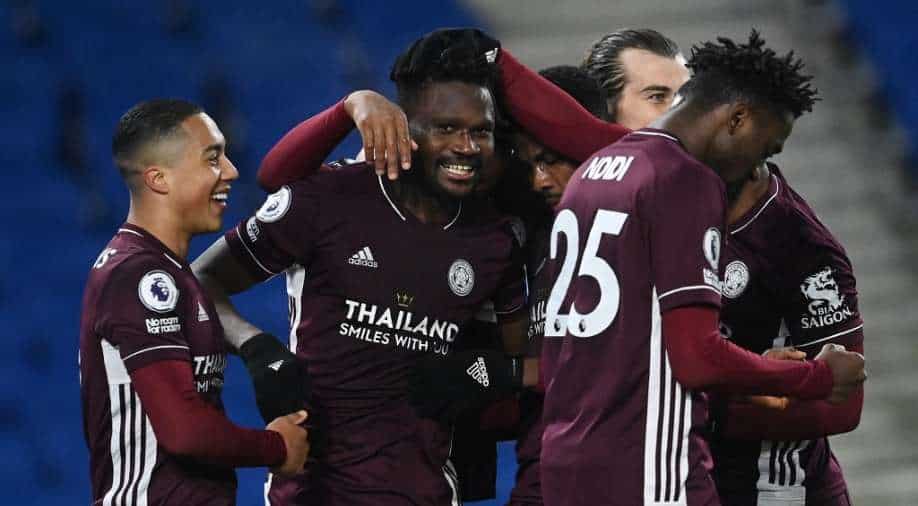 Leicester moved into second in the Premier League by coming from behind to beat Brighton 2-1 on Saturday, while Arsenal's top-four chances now look forlorn after being held 1-1 by Burnley.

Leicester moved into second in the Premier League by coming from behind to beat Brighton 2-1 on Saturday, while Arsenal's top-four chances now look forlorn after being held 1-1 by Burnley.

Depleted by a series of injuries to key players, Leicester have looked fatigued in recent weeks and fell behind after 10 minutes when Adam Lallana swept home his first Brighton goal.

The Seagulls have made a habit of dominating games without making it count and once again paid for failing to build on their lead as Lallana struck the woodwork and Neal Maupay had a goal ruled out for offside.

Leicester looked lifeless for the first 45 minutes without James Maddison and Harvey Barnes, but they bounced back after the break for a first win in four games.

"Second half I thought we were brilliant. We stopped them playing, then we showed our quality. By the end we deserved to win."

Kasper Schmeichel then denied Lallana again with a fine save before a goalkeeping error at the other end handed Rodgers's men a vital victory.

Leicester now have a seven-point cushion over fifth-placed Everton as they aim to not make the same mistake as last season when they crashed out of the top four at the business end of the campaign.

A fifth game without a win leaves Brighton still just three points above the relegation zone.

Arsenal's best hope of a return to the Champions League for the first time in five years now lies in winning the Europa League after letting two more points slip away at Turf Moor.

Mikel Arteta's men remain in 10th, nine points adrift of the top four and with that gap certain to grow on Sunday when fourth plays fifth as Chelsea take on Everton.

Arsenal could not have asked for a better start as Pierre-Emerick Aubameyang took advantage of some sluggish defending and a slow reaction from England goalkeeper Nick Pope to squeeze home his 14th goal of the season after just six minutes.

Granit Xhaka was stupidly sent off when the sides last met in December in the midst of a run of one win in 10 games that gave Arsenal a mountain to climb to get back in the race for a European place.

The Swiss midfielder had another afternoon to forget as six minutes before half-time he inexplicably fired the ball into the midriff of Chris Wood and the ball ricocheted into the net off the New Zealand striker.

"If you are giving something to the opponent anything can happen," said Arteta. "This is where we have the biggest margin for improvement."

Ralph Hasenhuttl's men topped the table in November, but a run of one point from a possible 27 had them looking over their shoulders.

However, the Championship-bound Blades proved the perfect opponents for Southampton as James Ward-Prowse's penalty and Che Adams's first goal in 17 games earned a long-awaited win.

Aston Villa's unexpected challenge for the top four is also faltering after a 0-0 draw with Wolves left them seven points adrift of Chelsea in ninth.

Villa again lacked the creativity of injured captain Jack Grealish as it was Wolves who twice came closest to a winner through their skipper Conor Coady.