Kyrgios cruises into fourth round of Miami Open 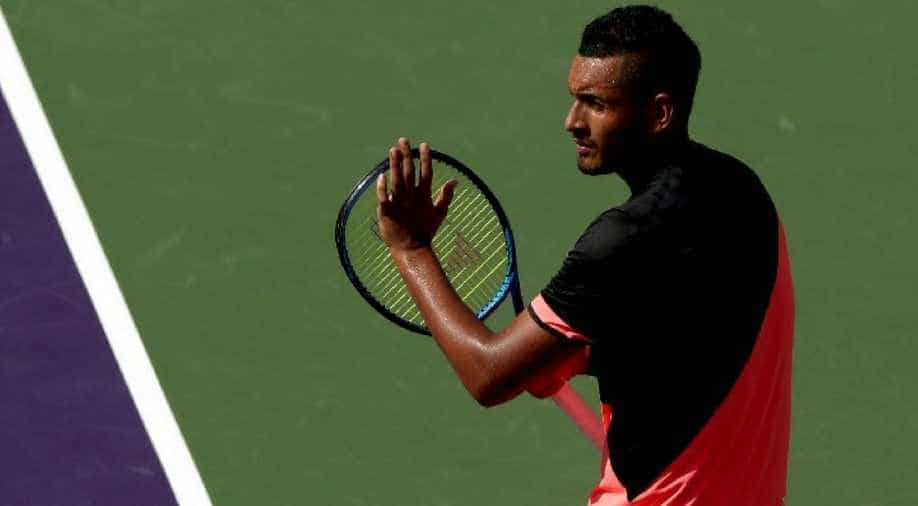 Nick Kyrgios moved into the fourth round of the Miami Open despite admitting he's lacking the match fitness to properly compete for the title.

Kyrgios arrived in South Florida having not played for two months thanks to a troublesome elbow injury which forced him to withdraw from tournaments in Rotterdam, Delray Beach, Acapulco and Indian Wells in recent weeks.

His 6-3, 6-3 victory here Monday against the Italian world No. 18 Fabio Fognini certainly suggested a return to peak form is attainable.

The Australian took just 29 minutes to win the first set and although Fognini battled hard in the second, it wasn’t enough to stop the 22-year-old who was powerfully crashing the ball around the court from all angles.

Yet afterwards, Kyrgios, who will face either David Ferrer or Alexander Zverev for a place in the final eight, insisted his injury problems are refusing to go away.

Is @NickKyrgios smiling because he just won or because @gordonhayward is in the stands? pic.twitter.com/mkrl5fmaOm

"I came here not expecting too much," he said. "I have been having back spasms and am nowhere close to 100 percent.

"So winning matches like this are a great confidence boost for me. I am only at 70 percent so I am just trying to get through and take it very slowly.

"I haven't been able to train hard. I am just slowly building myself up."

Kyrgios was serving and hitting powerfully, a sure sign that the elbow problem which has hampered him so far in 2018 seems to be on the mend.

"I am trying to keep everything lose, the elbow was feeling better a couple of weeks ago.

"I was feeling good and then I started having back spasms. I just have to keep my body moving and feel warm and loose."

With the likes of Andy Murray and Stan Wawrinka still out with injuries and Novak Djokovic desperately trying to return from a persistent elbow problem, Kyrgios isn’t alone when it comes to playing through the pain barrier.

"I have had a couple of niggling injuries during my career though no surgery yet touch wood," he added.

"I am working hard in the gym but I still need to tick some boxes when it comes to professionalism."

Kyrgios began the match confidently, getting an early break to storm to a 3-0 lead.

Fognini was cutting a frustrated figure in the afternoon sun, his inability to make inroads into the rapid fire Kyrgios' serve causing the 30-year old to angrily lay bare his frustrations on more than one occasion.

The Australian, however, was far more consistent and when he broke again early in the second set, the writing was very much on the wall for an opponent who simply didn’t have any answers.

His serve was clocked at an impressive 137 mph but Kyrgios, who never seems too far away from a meltdown, had to dig deep in an attempt to close out the match.

Fognini, however, was unable to pull himself back into the match and another break of serve put the seal on a good afternoon’s work for Kyrgios who was boosted by having Boston Celtics star Gordon Hayward in his box here in Key Biscayne.

"It’s been great to have him around," says Kyrgios, who is a huge NBA fan and follows the Celtics.

Fellow Australian Thanasi Kokkinakis failed to build on his win over Roger Federer in the previous round, falling 3-6, 6-4, 7-6 (7/4) to Spain's Fernando Verdasco, while Canadian Denis Shapovalov outlasted American Sam Querrey 6-4, 3-6, 7-5.

Verdasco's win was a fiery affair with the Spaniard accusing Kokkinakis' father of talking between points in the deciding set.

Verdasco also called out Kyrgios, who before the match suggested on Twitter that the Verdasco is "the saltiest dude" because of his past experience playing Australians.

"When you have the courage to put a tweet insulting another player you need to have the same to don't delete it," countered Verdasco.