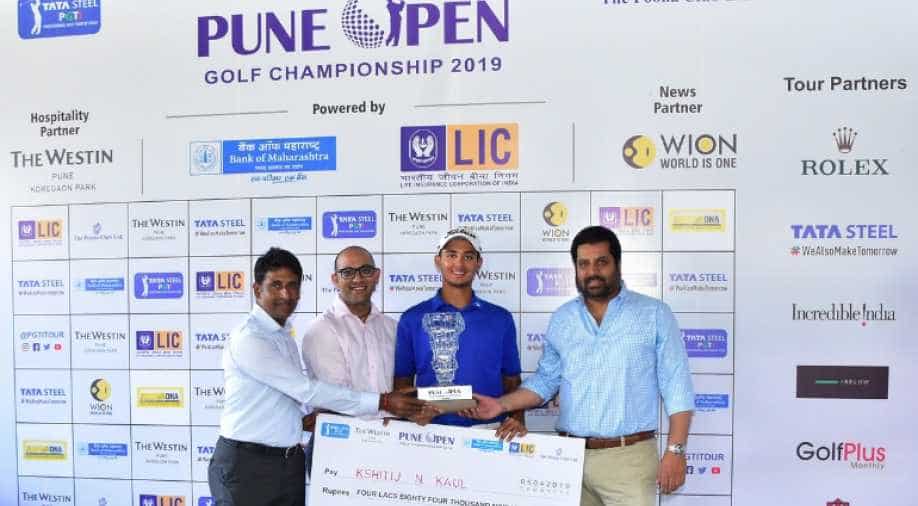 Teenaged rookie Kshitij Naveed Kaul of Delhi, playing only his ninth event as a professional, displayed maturity way beyond his years to shoot a final round of four-under-67 that helped him register a one-shot victory at the Pune Open Golf Championship 2019.

18-year-old Kaul’s (69-67-66-67) triumph at the Poona Club Golf Course saw him close the week with a total of 15-under-269 and made him the third-youngest winner on the TATA Steel PGTI after Karandeep Kochhar and Shubhankar Sharma both of whom won on the tour as 17-year-olds.

Kshitij Naveed Kaul, the round three joint leaders, had a topsy-turvy final round as he struggled to achieve accuracy with his tee shots. However, former India No 1 in the junior and amateur category, managed to salvage the day with his brilliant short-game.

First, it was Kaul’s outstanding chipping that earned him birdies from tough positions on the sixth, ninth and 12th even as he dropped a bogey on the 11th. His chip-in on the 12th was his third of the tournament.

The pro from the Delhi Golf Club then gave a glimpse of some top-class putting as he sank birdies from 15 and 30 feet on the 14th and 15th respectively despite a couple of ordinary tee shots on those holes.

The bogey on the 16th didn’t deter the 6-foot tall Kshitij as he showcased his calm temperament and nerves of steel once again with the decisive birdie on the 18th where he found the green in two and two-putted to avoid a playoff with nearest rival Yashas Chandra.

Kshitij, who became richer by Rs 4,84,950, thus climbed from fifth to third place in the TATA Steel PGTI Order of Merit. His earnings for the season now read Rs 11,59,650.

Kaul, who had posted two top-5s including a runner-up finish earlier in the season, said, ''My hitting was all over the place today but I did really well within 100 yards of the green. My chipping and putting got me out of trouble on a number of occasions today. I attribute my win to good course management and perfect execution of my plans and strategy.''

''The birdie chip-in on the 12th gave me a lot of self-belief. That set the tone for the remaining holes. I wasn’t following the leaderboard and only looked at it after walking onto the 18th green. So I was quite relaxed through the round,'' said Kshitij a winner of four titles at the amateur level and 40 at the junior level.

''On day one I incurred a two-shot penalty after hitting some other player’s ball. But I didn’t let that error affect my thought process. I also finished with a flurry of birdies yesterday that helped my confidence. I think those were two important moments in the week for me,'' Kshitij said.

''A win so early in my career is a huge morale-booster. I was encouraged by the presence of my mother and maternal grandfather during the tournament. I dedicate this win to an aunt of mine who passed away last week,'' Kshitij added.

Yashas Chandra’s bogey-free 66 helped him gain two spots and finish runner-up. The 2018 PGTI Emerging Player of the Year had taken the lead on the final day when he made his fifth birdie of the round on the 13th. He missed a hole-in-one by one foot on the 13th.

However, Yashas slowed down thereafter with pars all the way till the end. He narrowly missed a birdie on the last as his putt stopped inches from the hole. A birdie there could’ve taken him into a playoff with Kaul.

Bengaluru’s Syed Saqib Ahmed (70) and round three joint leaders Shankar Das (72) of Kolkata took a share of third place at 10-under-274.

Pravin Pathare and Pratik Nirmale had the best finish among the Pune-based professionals. The duo closed the week in tied 24th at one-over-285.