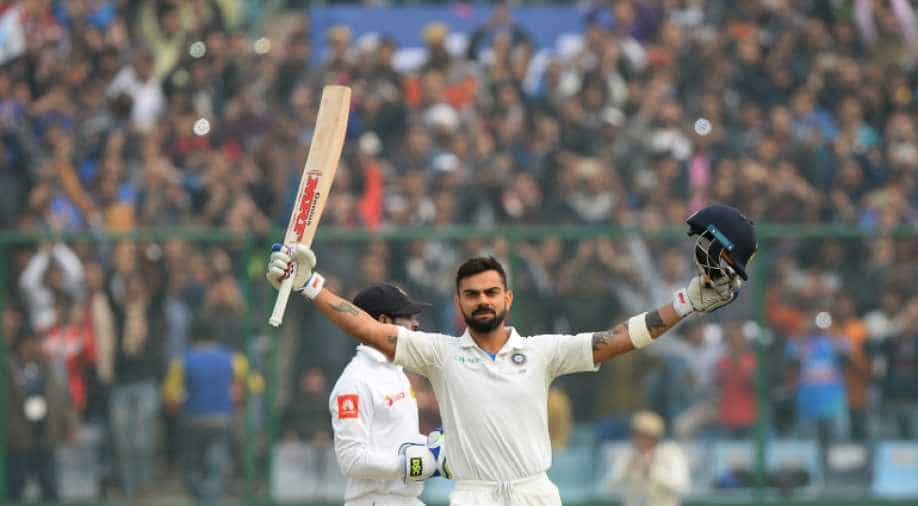 Kohli raises his bat after completing his double century on day two of the third Test between India and Sri Lanka at the Feroz Shah Kotla Cricket Stadium in New Delhi. Photograph:( AFP )

India's current 'Milestone Man', who had emulated Rahul Dravid with his previous double century in Nagpur, today equalled Sachin Tendulkar and Virender Sehwag for most double hundreds for India in Tests.

The 29-year-old scored his record sixth Test double hundred on the second day of the ongoing third Test against Sri Lanka at the Feroz Shah Kotla here.

Kohli pulled pacer Suranga Lakmal and ran two to bring up his sixth double century in 238 balls, which included 20 boundaries.

He is also only the second Indian after Vinod Kambli to score back-to-back double hundreds. In 1993, the former left-handed batsman had scored 224 against England in Mumbai and 227 against Zimbabwe in Delhi.

Overall, Kohli is in the sixth place in the list of most double hundreds in a career, which is topped by Australian legend Don Bradman (12), followed by Sri Lanka's Kumar Sangakkara (11), Lara (9), England's Wally Hammond (7) and Sri Lanka's Mahela Jayawardene (7).