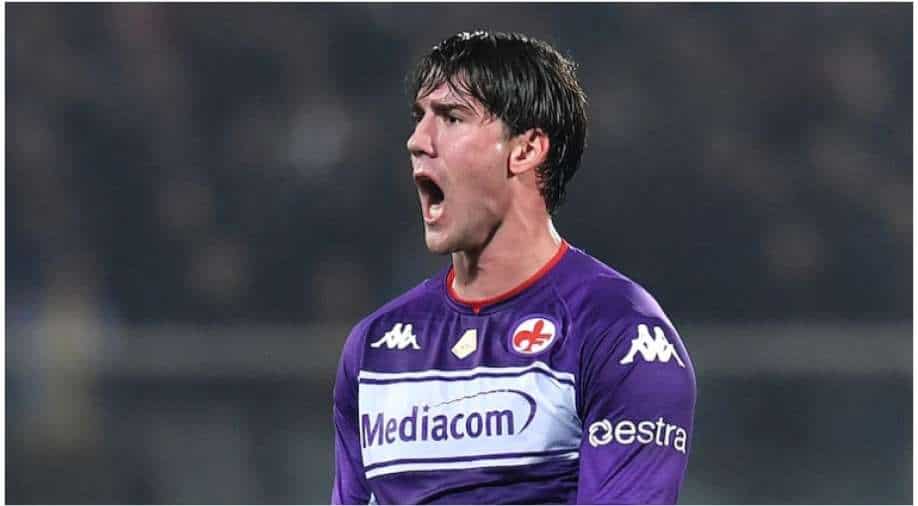 The 22-year-old, who is the joint-top scorer in Serie A this season with 17 goals, has signed a deal until June 2026 in Turin.

Juventus have signed Fiorentina striker Dusan Vlahovic, the Italian club announced on Friday, with the deal worth up to a maximum of 80 million euros ($89.22 million), plus other charges, making it the biggest transfer of the January window so far.

The 22-year-old, who is the joint-top scorer in Serie A this season with 17 goals, has signed a deal until June 2026 in Turin.

"Juventus... has reached an agreement with Fiorentina for the definitive acquisition... of the player Dusan Vlahovic for a fee of 70.0 million euros, payable in three years," Juventus said in a statement.

"Plus the solidarity contribution envisaged by the FIFA regulations and ancillary charges for a total of 11.6 million euros. In addition, bonuses of up to a maximum of 10.0 million euros are envisaged for the achievement of growing sporting goals."

Vlahovic could make his Juve debut when they host mid-table Hellas Verona on Feb. 6 in Serie A.

He becomes the most expensive transfer of the January window so far, ahead of Spaniard Ferran Torres, who joined Barcelona from Manchester City for around 55 million euros.

Fiorentina publicly put Vlahovic up for sale after he refused their offers of a contract extension, with his deal due to expire at the end of next season.

The Serbian also becomes the most expensive January signing ever in Serie A, ahead of AC Milan`s purchase of Lucas Paqueta from Flamengo in 2019 for a reported 35 million euros.

Vlahovic became one of the most sought-after young players in Europe during four years in Florence and hit his stride last season as he scored 21 league goals and won the Serie A Best Young Player award.

He continued that form under new coach Vicenzo Italiano this season, scoring 17 goals in 21 Serie A games, a record only matched by prolific Lazio striker Ciro Immobile.

The news did not go down well with Fiorentina fans, as another of their star players left for rivals Juventus, following in the footsteps of the likes of Federico Chiesa and Federico Bernardeschi.

Insulting and threatening banners were left outside the club`s Artemio Franchi stadium on Monday as reports of Vlahovic`s impending move to Turin circulated.

Juventus are fifth in Serie A, six points ahead of seventh-placed Fiorentina with a game in hand.
Massimiliano Allegri`s side have struggled for goals this season, and their record of 34 league strikes is the 11th-best in the division.

WATCH: Umpre tells Stuart Broad to 'shut up' and get on with his batting after his antics against India