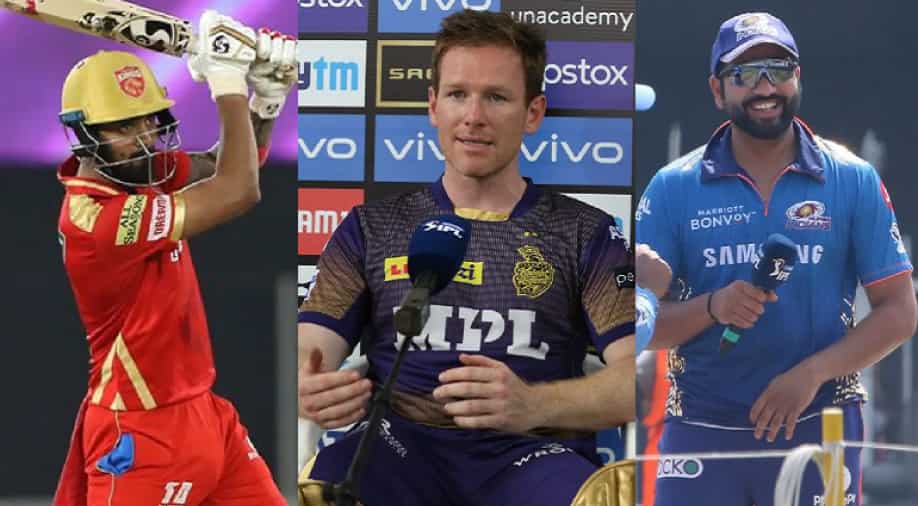 IPL 2021 playoffs qualification scenario explained: With CSK, Delhi Capitals and RCB confirmed to finish inside the top four, we take a look at the possible permutation and combinations for the other four teams in the fray for the final spot.

Virat Kohli-led Royal Challengers Bangalore (RCB) became the third team to secure a spot in the IPL 2021 playoffs with a 6-run win against Punjab Kings (PBKS) on Sunday (October 03). RCB now have 16 points from 12 matches so far this season and have made it to their second successive playoffs in two years. With the defeat, PBKS' hopes of finishing in the playoffs recieved a major jolt but they are still in the race.

Kolkata Knight Riders (KKR) took a step closer towards securing a spot in the playoffs this year as Eoin Morgan & Co. defeated Sunrisers Hyderabad comprehensively by six wickets on Sunday. KKR are currently placed fourth on the points table with 12 points from 13 matches so far this season and are favourites to bag the last remaining spot in the playoffs this season.

There are four teams in the fray for the final spot in the playoffs ahead of Tuesday's clash between Rajasthan Royals and Mumbai Indians. Here is a look at what the four teams need to do to qualify for IPL 2021 playoffs -

Eoin Morgan & Co. defeated Sunrisers Hyderabad on Sunday to enhance their chances of making it to the playoffs. They are now the favourites to clinch the remaining one spot in the top four. KKR have 12 points from 13 matches with a net run rate of +0.294. KKR need to win their last final league game of the season against Rajasthan Royals to qualify for the playoffs. A loss against RR might prove fatal to their chances of making it to the knockout stages.

Sanju Samson-led Rajasthan Royals pulled off a stunning victory against CSK to remain alive in the race for playoffs. They are now one of the strong contenders to finish in the top four with two matches in hand. RR have their fate in their own hands as they are lined up to face KKR and Mumbai Indians in their remaining two matches. If they manage to win both, they will make it to the playoffs. In case they lose one out of the two matches, their fate will depend on the results of other teams. If RR lose both their matches, they will stand eliminated.

Mumbai Indians are currently the least favourites to reach the playoffs but they can spring a surprise. Rohit Sharma's men have ten points from 12 matches so far and have two games in hands to make it to the next stage. They will have to win both their remaining matches by big margins to stand a chance of reaching the top four as they have the worst net run rate of -0.453 among all four teams in contention for the final spot. MI can qualify with one win in their next two games if PBKS and RR lose all their remaining matches.

Can Mumbai Indians and Punjab Kings qualify for IPL 2021 playoffs?

Both Mumbai Indians and Punjab Kings are currently in a tricky situation. Mumbai have the worst net run rate among all four teams and their best bet to qualify will be to win their remaining two matches by big margins. On the other hand, Punjab Kings can qualify if they beat CSK by a huge margin and go ahead of KKR and other teams who will finish on 12 points in terms of the net run rate. With MI facing RR in their next game, only two teams can reach 14 points and it remains to be seen who will bag the fourth spot in the playoffs this season.