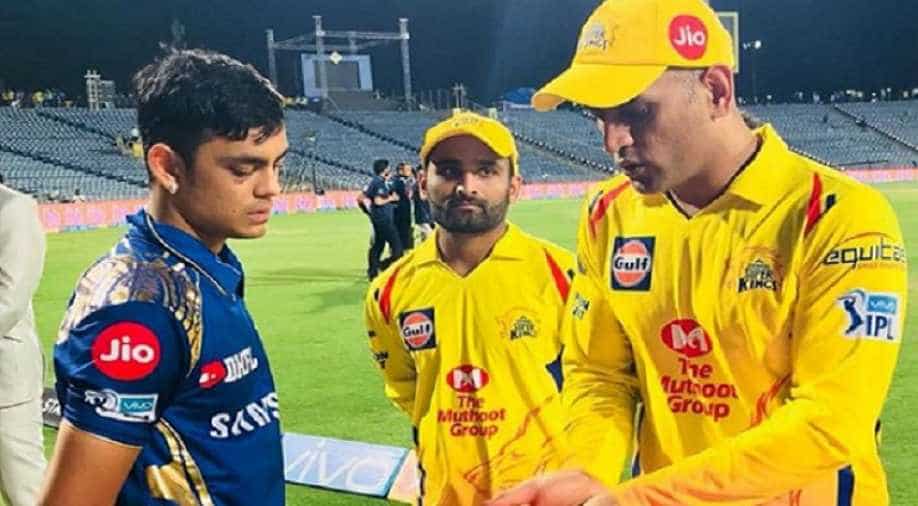 Chennai lost to Mumbai by 8 wickets on Saturday Photograph:( Instagram )

Chennai skipper MS Dhoni’s wicketkeeping skills are far from conventional as he likes to flip the bails behind him.

No chance is impossible with Dhoni at the stumps and it makes him an extremely valuable member to the side.

The veteran further chips in with advice and suggestions for the youngsters looking to improve their skills. One example of that was visible in the Indian Premier League.

On Saturday, Dhoni was spotted sharing some wicketkeeping skills with young Mumbai keeper Ishan Kishan when Chennai hosted them in Pune.

The two players from Jharkhand were involved in an interaction which was snapped up and shared by the Mumbai on Instagram.

Captioned with, “Learning a trick or two from the best in the business! The Jharkhand boys – @ishankishan23 and MS Dhoni bond after the game.”

Learning a trick or two from the best in the business! The Jharkhand boys - @ishankishan23 and MS Dhoni bond after the game. #CricketMeriJaan #MumbaiIndians #CSKvMI

Meanwhile, Mumbai picked up their second win of the season as their top-order came to the fore for an 8-wicket win with four balls to spare.

Chennai batting first, scored 169 runs, however, Mumbai chased down the target with the help of Rohit Sharma's half-century.

Ind vs Aus: Batting with more finesse now and it's working, says Smith