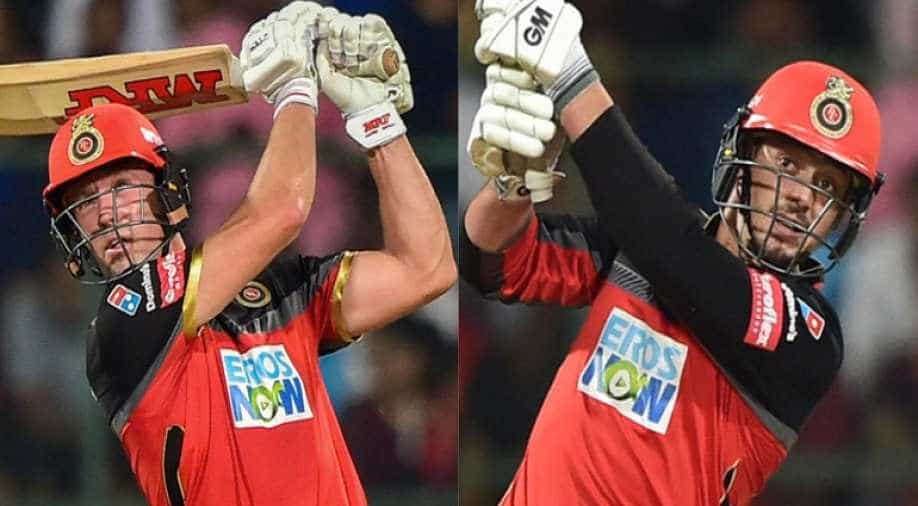 AB de Villiers and Quinton de Kock powred Bangalore to 205  against Chennai at the at the M.Chinnaswamy Stadium on Wednesday.

Both De Villiers and de Kock went berserk after Virat Kohli's wicket and slammed half-century each.

However, the two lost their wickets in quick successions.

Skipper Kohli brought a change in his batting position and opened with de Kock but failed to give that start after he gave simple catch to Ravindra Jadeja of Thakur.

Mandeep Singh too stood up for the team and slammed 17-ball 32 to help them set a decent total.

MS Dhoni on Wednesday won the toss and opted to bowl against Virat Kohli-led Bangalore at the M.Chinnaswamy Stadium on Wednesday.

It will be the first time when Kohli will come face to face with Dhoni in this year's cash-rich tournament.

Talking about his decision to bowl, Dhoni said,"We will bowl first. It (the pitch) looks good from the top, but when you rub the fingers over it, it's slightly wet. Sometimes it affects, sometimes it doesn't. It's a tough ground to defend. We have got equal amount of support (smiles). "

"It's rare, when you come to Bangalore, you don't get this kind of support. It's good, generally it's a good crowd in Bangalore irrespective of which team is playing. It is one of the best stadiums to play in because of the crowd," he added.

When asked if he feels there is any kind of rivalry with Virat, Dhoni said,"I never felt it was about a personal rivalry (on playing against Virat). It's a sport that we are supposed to play in the right spirit."

When asked Virat about the strategy he has for today's game, Virat said,"good to see the mix of yellow and red in the same stadium. Looking forward to a good game of cricket. We just need to focus on one game at a time. CSK have played some good cricket."

"Two teams play well and stay at the top and four others are fighting for two spots. We are in the group of four. We need to keep playing the kind of cricket we played in the last game. We have two changes as well," the Bangalore skipper added.

If seen the squad of the two teams, then for Chennai Karn Sharma and Faf du Plessis make way for Harbhajan and Imran Tahir, while Pawan Negi replaced Manan Vohra and Colin de Grandhomme is playing in place of Chris Woakes.