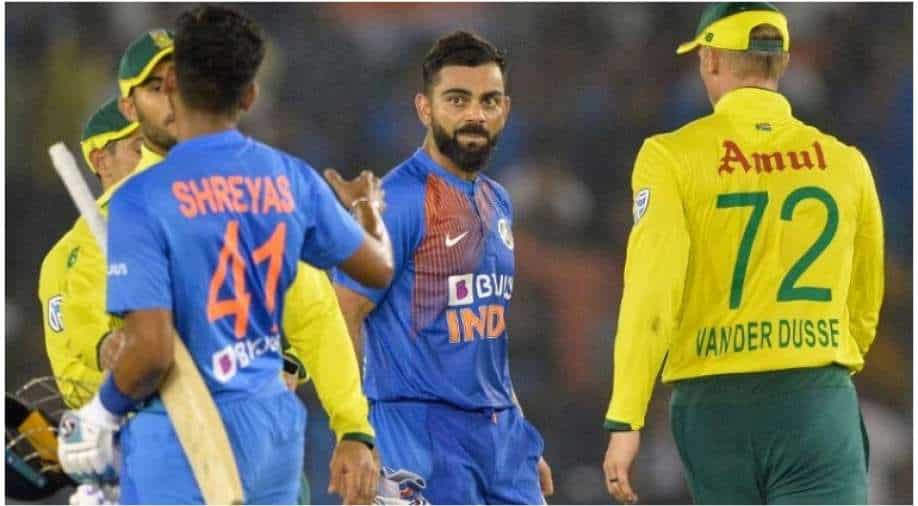 IND tour of SA likely to be pushed back by a week: Report Photograph:( AFP )

Team India are scheduled to tour South Africa in mid-December. However, the upcoming series might be postponed by a week due to the Omicron threat.

Team India have quite a few cricketing assignments lined-up in the near future. Soon after the conclusion of the New Zealand Tests at home, Virat Kohli-led India are scheduled to travel to South Africa for an all-format tour. However, there are now dark clouds over the SA tour due to the Omicron threat. The new Covid variant has cast its spell worldwide as there is panic and uncertainty. Hence, travel restrictions might be imposed once again on a large scale globally.

Talking about the SA tour, BCCI and Cricket South Africa (CSA) are constantly in touch and are continuously monitoring the situation. While both the boards had expressed their confidence of the tour to go on as per schedule, there are reports that it might be postponed by a week.

ALSO READ | India’s tour of South Africa on as of now, we have time to decide, reveals BCCI chief Sourav Ganguly

A BCCI official, on Thursday (December 2), confirmed to ANI that both boards are in constant touch and soon a decision will be taken keeping the safety of players in mind.

"We are discussing to push back the series by a week due to the threat of Omicron COVID variant and we are awaiting the Indian government nod, both boards are in constant touch and everything is being discussed. The health and safety of our players is of utmost importance," the senior official told ANI.

Earlier, Anurag Thakur, the Union Minister for Youth Affairs and Sports had made it clear that the Sourav Ganguly-led BCCI need to consult the Indian government before sending the national side to the rainbow nation, where a new COVID-19 variant has already emerged.

For the unverved, Kohli-led India's tour of South Africa is scheduled to commence on December 17. The tour comprises three Tests, three ODIs and four T20Is. India's last visit to South Africa was in early 2018 where they lost the Tests but won the limited-overs series.

The final decision regarding the tour will be out soon.