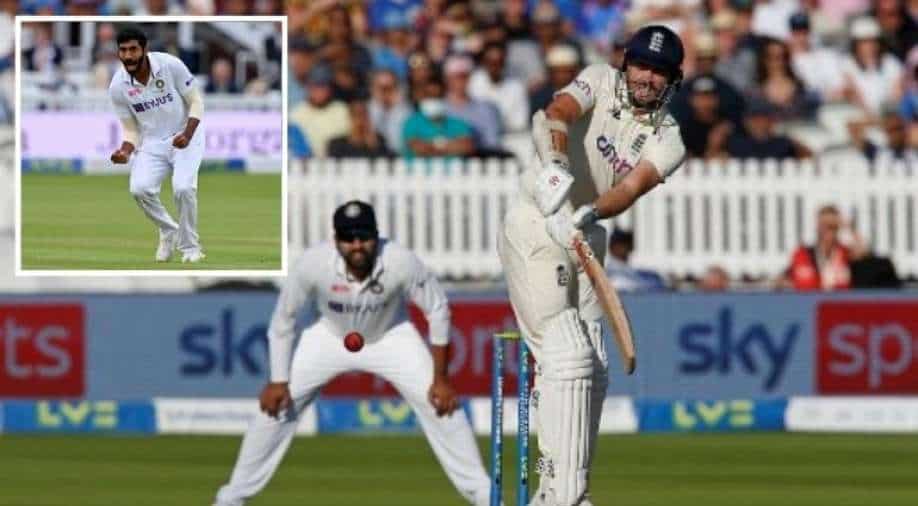 After Jasprit Bumrah's bouncer barrage to James Anderson on Day 3 of the Lord's Test, things got heated up between India and England players during the second Test. As per a report, players from both camps were involved in a heated exchange on their way to the dressing rooms after the third day's play.

India and England were involved in a high-voltage second Test, at Lord's, which ended with Virat Kohli-led India coming on top of hosts by a whopping 151-run margin to go 1-0 up in the five-match series, being held in England and Wales. While the match had several memorable moments, Jasprit Bumrah's relentless fast-bowling spell -- comprising a barrage of bouncers -- to England's James Anderson during the home side's first innings became a huge talking point.

Following Bumrah's bouncers to Anderson, who was caught off guard by the Indian speedster's extra pace and bounce, things got heated up between the two sides. After England managed a slender 27-run lead over India and the fiery face-off between Bumrah-Anderson ended on Day 3, Joe Root-led England tried to come hard on Bumrah but paid the price as it Kohli & Co. replied with much intent to script a historic comeback on the final day and win the Test by 151 runs.

Nonetheless, as per a report in The Telegraph, it has been claimed that things turned ugly between India and England following the Bumrah-Anderson face-off on Day 3 of the Lord's Test.

India and England players were reportedly involved in a 'bust-up' in the Lord's long room after the conclusion of Day 3's play during the second Test, which ended on August 16. There were 'tense scenes in the Lord's pavilion at the end of the third day's play. The report referred to the incident as a 'bust-up' and claimed that the players from both camps were seen arguing on their way to their dressing rooms and the confrontation continued even in the Lord's long room.

"Confrontations in the Lord's Long Room - the hallowed inner sanctum of English cricket - are almost unheard of," stated the report from The Telegraph', also claiming that the two captains -- Kohli and Root -- were also believed to be involved in a heated exchange.

Following Bumrah-Anderson face-off, India came out to bat in their second essay, trailing England by 27 runs. The hosts had their noise ahead on the final day as India were reduced to 209-8, leading by 182 runs, when Bumrah-Mohammed Shami battled the short-ball ploy versus the English pacers and set-up a daunting 272-run target for the hosts.

England fell like nine pins, in response, to fold for 120 and lose the Test by 151 runs. The third Test commences at Headingley, Leeds from August 25 (Wednesday).