India beat Sri Lanka in 3rd T20I to clinch series 3-0, equal record for most T20I wins on the trot 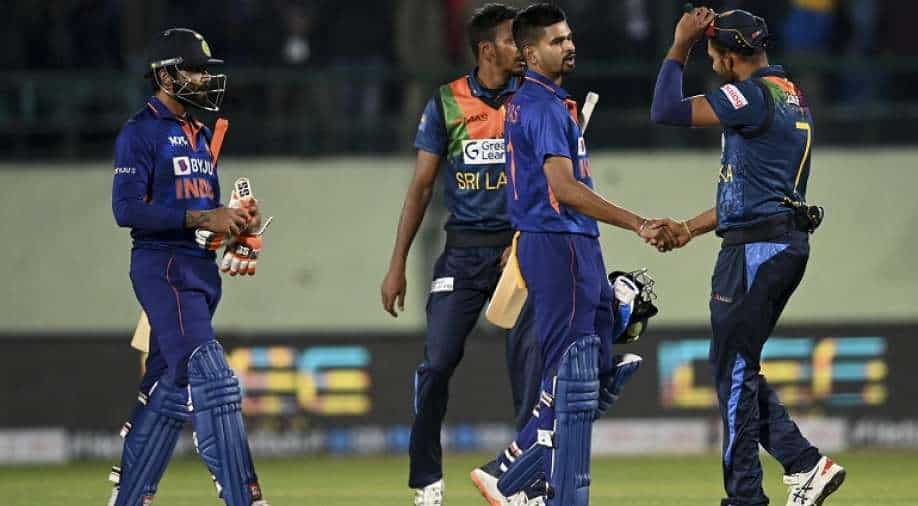 Shreyas trumped the chase with 73* off 45 balls - his third successive half-century. Photograph:( AFP )

Team India completed 3-0 T20I series whitewash against Sri Lanka on Sunday here at HPCA Stadium in Dharamshala. Shreyas Iyer starred with an unbeaten 73* as the hosts chased the target of 146 within 16.5 overs.

India captured the final T20I match by six wickets. For hosts, Shreyas Iyer starred with an unbeaten 73* as the Men in Blue chased the target of 146 within 16.5 overs.

Earlier, Indian bowlers restricted Sri Lanka to the score of 146/5 in the 20 overs. For Sri Lanka, Dasun Shanaka again played a captain inning of 74* and took visitors to a respectable total while Dinesh Chandimal scored 25.

ALSO READ: With Siraj, Harshal and Avesh in the mix, India's pace attack shaping up well for T20 World Cup 2022

Shreyas trumped the chase with 73* off 45 balls - his third successive half-century.

Hosts dominated from the word go and chased down the target with six wickets and 19 balls to spare.

Opting to bat first, visitors had the worst possible start as they lost both their openers inside the first two overs of the innings.

Siraj sent Danushka Gunathilaka back to the pavilion in the final ball of the first over while Avesh in the very next over dismissed Pathum Nissanka.

In the fourth over, Avesh struck again as Sanju Samson caught Charith Asalanka with a half-dive. After the powerplay, the visitors score read 18/3. With SL in trouble, hosts dictated the pace of the innings.

In the 9th over, Bishnoi bowled Janith Liyanage to create more trouble for Lankans. In the 13th over Patel dismissed dangerously looking Dinesh Chandimal on the score of 25 to pile more misery on visitors.

After that setback, captain Dasun Shanaka took matters into his own hand and with Chamika Karunaratne he assured that Lankans don't lose any more wickets and took the team's score to 146/5.