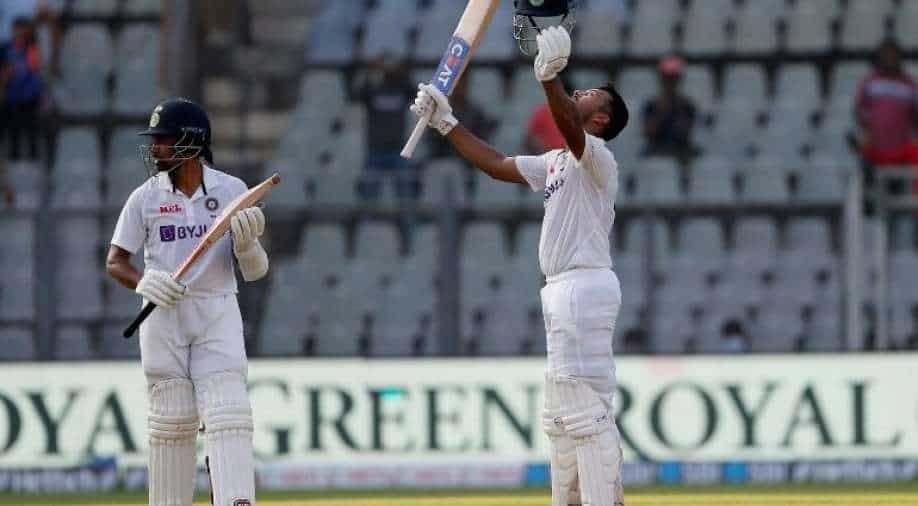 Mayank Agarwal scored his 4th Test ton as India ended day-1 of the 2nd and final Test at 221/4. Agarwal scored an unbeaten 120 while Wriddhiman Saha was not out on 25. Resuming at 111/3 after tea opener Mayank Agarwal and Shreyas Iyer steadily carried on from where they had left after the fall of three quick wickets.

Despite losing partners at the other end Mayank Agarwal looked solid and kept the scoreboard moving and capitalized on the poor deliveries that came his way.

Making a comeback in Kanpur Mayank Agarwal failed to deliver with the bat but in the second Test he ensured that one more opportunity does not go begging.

Wicket-keeper batsman Wriddhiman Saha joined him at the other end and the duo struck a fifty partnership to take India's total beyond the 200-run mark.

Earlier in the day, Ajaz Patel wreaked havoc with the ball as Virat Kohli opted to bat first after the delayed start due to wet outfield, the openers justified the captain's decision as Shubman Gill continued with his decent run of form with the bat scoring 44 of 71 balls.

Gill once again failed to capitalize after getting a good start as Ajaz Patel got him caught in the first slip to Ross Taylor. The opening pair put on 80-runs and in the same score 3 wickets fell in quick succession, leaving India reeling at 80/3.

Cheteshwar Pujara's poor run of form continued as the Saurashtra lad struggled with the bat falling victim to Patel who cleaned him up for a 5-ball duck.

ALSO READ: Kohli said nothing about it: Laxman surprised with Rahane, Jadeja and Ishant's injuries for 2nd Test

Virat Kohli too was dismissed by Ajaz Patel without troubling the scorers. Kohli was out leg before, a decision which could have gone the other way. Skipper survived just 4 balls and even took DRS but the third umpire Virender Sharma still ruled him out.

Undoubtedly Ajaz Patel was New Zealand's star performer with the ball picking up all the wickets that fell on the day. Brief Scores: India 221/4 (Mayank Agarwal 120* Shubman Gill 44; Ajaz Patel 4-73) vs New Zealand