If he doesn't perform vs NZ, you can say 'thank you very much': Virender Sehwag sets ultimatum for struggling Ajinkya Rahane 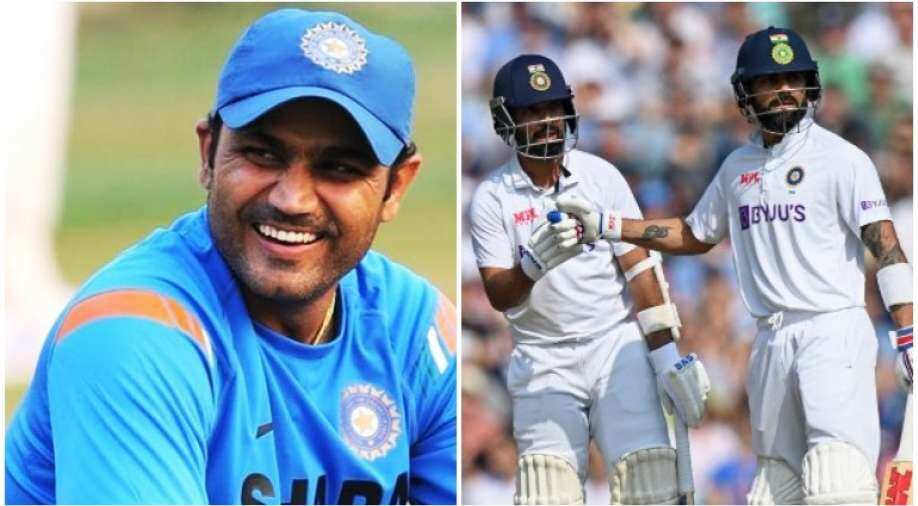 Ajinkya Rahane's struggles have been known to all. Virender Sehwag has made a big statement on Rahane's form and believes he should be dropped if his failures continue in the New Zealand home series.

Many former cricketers have lashed out at India's Test vice-captain Ajinkya Rahane for his struggles and inconsistency. For the unversed, Rahane averages only 19.86 since his Melbourne Test ton, in late 2020. In addition, the 33-year-old has only one fifty-plus score in the last ten innings and was woefully out of form in the England Tests in the United Kingdom.

With India set to play the T20 World Cup, soon after IPL 14's second and final leg, and then to host New Zealand in two Tests in November, former Indian opener Virender Sehwag has backed Rahane to feature in the home assignments, but has set an ultimatum for the senior batsman.

Speaking on a discussion on Sony Sports Network, Sehwag said, "Everyone goes through a bad phase. The question is how you behave with your player in a bad phase, whether you back him or leave him. According to me, Ajinkya Rahane should get a chance when the next series happens in India. If he doesn't perform there, you can say - thank you very much for your contribution."

ALSO READ | If I wasn't dropped, Rahul Dravid and others wouldn't have come in: Sanjay Manjrekar calls for Ajinkya Rahane's omission

"I feel when your overseas tour goes bad, you should get a chance in India as well because this comes once every four years but, you will play a series in India every year. If the series goes badly in India, then I will understand that the form which was bad overseas is there as well, then he deserves it now. I have seen many great players who have not done anything for 8 or 9 Tests, not even a fifty, and they persisted with, and the result was that they performed going ahead and scored 1200-1500 runs in a year in Test cricket," he added.

With India having plenty of options to choose from with the likes of Shubman Gill, Prithvi Shaw, Suryakumar Yadav, Mayank Agarwal, Hanuma Vihari, Rahane is running against time to save his Test spot. The veteran batsman will hope to return to form at the earliest when India host New Zealand later this year, which will be followed by the South Africa tour.