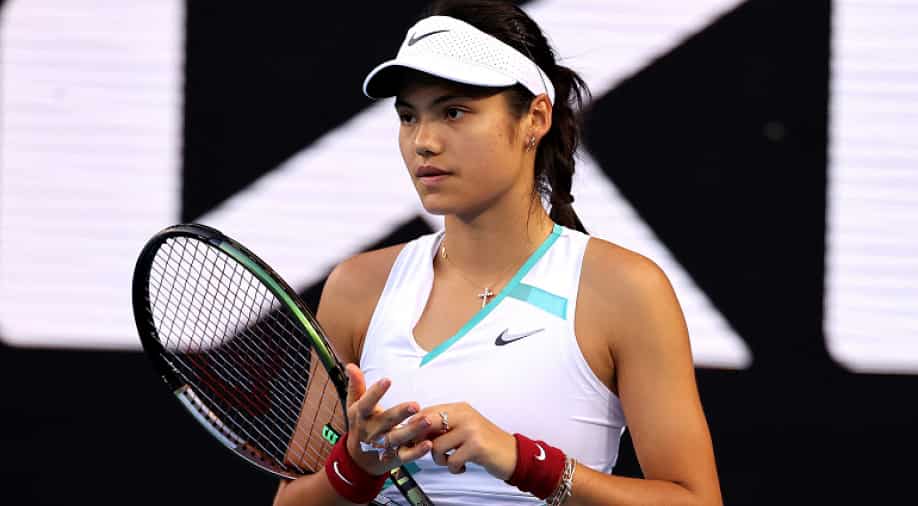 Emma Raducanu said she doesn't feel safe at her own home after being stalked. Photograph:( AFP )

British tennis star Emma Raducanu opened up on the horrific experience of being stalked by a 35-year-old ex-delivery agent, who left flowers for her at her home and stole her father's shoe as a 'souvenir'.

British tennis ace Emma Raducanu recently opened up on her horrific experience of being stalked by a former Amazon delivery agent, who tracked down her address and left notes and flowers among other things to leave the 19-year-old creeped out. The tennis star told a British court on Friday (January 28) that she no longer feels safe at her own home.

Raducanu told the court that the stalker identified as Amrit Magar, 35, visited her home thrice and left notes. In one instance, he also allegedly stole her father's shoe as a 'souvenir' leaving the tennis star 'creeped out'. The US Open champion told the court that she has been 'constantly looking over her shoulder' since the incidents and fears for her safety.

Magar was unemployed when he first saw Raducanu on television and decided to travel to the London suburb where the tennis star lives with her family. He managed to find out the exact location of her house by asking strangers for direction and left a note which said the US Open champion 'deserved love'.

On his second visit to Raducanu's home, Magar left a note depicting the 23 miles he had walked from his home in the hopes of meeting the tennis ace. Magar was arrested after he visited Raducanu's home for a third time on December 4 last year and decorated a tree in the front garden of the house with Christmas lights. He then went on to steal a show from the home, believing it to be of the tennis star.

However, the shoe belonged to Raducanu's father, who had spotted Magar on the CCTV camera and decided to alert the police. Raducanu's father followed Magar in his car while calling the police which led to the arrest of the 35-year-old stalker. His stolen show was found in Magar's bag, who admitted he 'wanted a souvenir'.

I am worried he might come back: Emma Raducanu tells court

In a statement read out in the court, Raducanu stated that she fears going out alone and is feeling unsafe at her own home where she should feel the safest. Raducanu spoke to the officers on phone from Melbourne, as she was busy preparing for the ongoing Australian Open 2022. The 19-year-old tennis star said she is worried Magar knows her address and might decide to stalk her again.

"Since all this has happened, I have felt creeped out. I feel very apprehensive if I go out, especially if I am on my own. Because of this I feel like my freedom has been taken away from me. I am constantly looking over my shoulder. I feel on edge and worried this could happen again. I don't feel safe in my own home which is where I should feel safest," said Raducanu.

"I want to move to a new house with better security because I am worried he might come back as he knows where my home is," she added.

Magar was found guilty of stalking in the Bromley Magistrates' Court on Friday and is all set to be sentenced next month. He was released on bail on the basis that he does not contact Raducanu or her family, or visit the street that they live on.