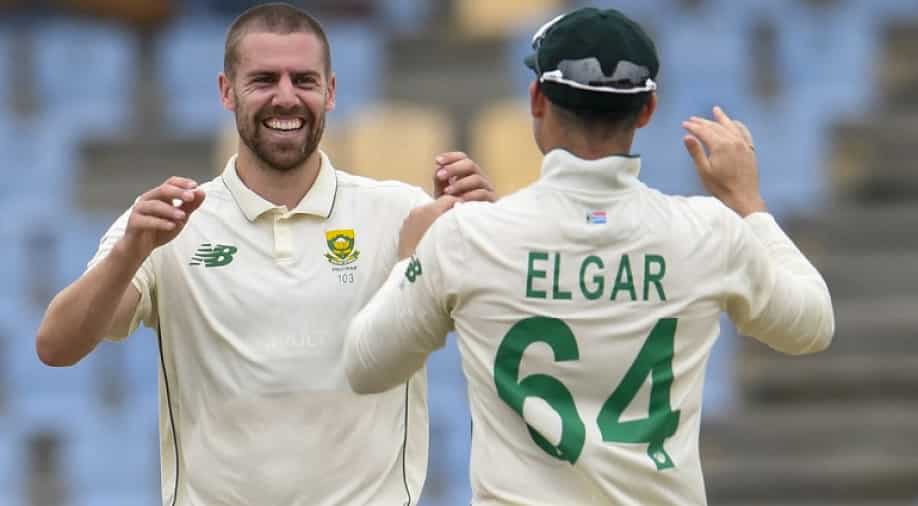 Anrich Nortje has been ruled out of the Test series against India. Photograph:( AFP )

South African fast bowler Anrich Nortje has been ruled out of the upcoming three-match Test series against India due to a persistent injury.

South Africa have been handed a massive blow ahead of the three-match Test series against India at home. Proteas fast bowler Anrich Nortje has been ruled out of the Test series owing to a persistent injury. The two sides are all set to lock horns in the series-opener of the three-match rubber from Sunday (December 26) at the SuperSport Park in Centurion.

Cricket South Africa on Tuesday confirmed that Nortje has failed to recover fully ahead of the start of the Test series and will not be taking part in the three-match rubber. His absence will be a huge blow for the hosts against a strong Indian side as Nortje was on top-notch form in the Indian Premier League (IPL) 2021 and the T20 World Cup 2021.

He has been one of the best fast bowlers for his country across formats over the last couple of years and was expected to continue his stellar run in the India Test series. In his absence, Kagiso Rabada will spearhead South Africa's pace attack also consisting of the likes of Lungi Ngidi and Duanne Olivier among others.

"He has unfortunately not recovered adequately for the expected Test match bowling loads and is currently consulting with specialists to manage and advise on his recovery. No replacement will be brought in," CSA said in a statement.

South Africa have been training ahead of the start of the three-match series and the Indian team also has hit the ground running in Centurion. The Indian players were spotted enjoying a quality practice session at the SuperSport Park on Monday under the watchful eyes of head coach Rahul Dravid.

India have some major selection headaches ahead of the series-opener as the likes of Hanuma Vihari, Shardul Thakur and Shreyas Iyer are all in contention to make the cut. It remains to be seen if India will head into the game with five pacers or an extra batter considering the bounce and pace on offer in Centurion.