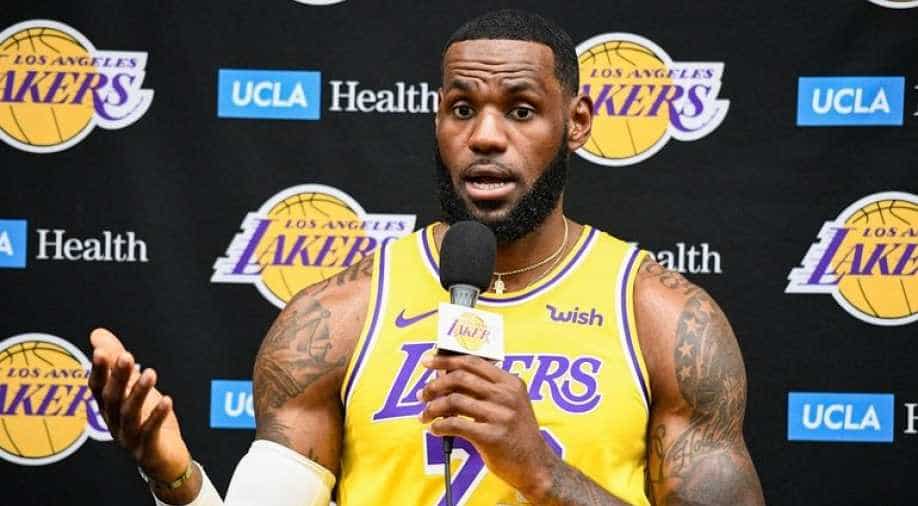 Morey's tweet of support for pro-democracy protests in Hong Kong set off a firestorm, prompting Chinese sponsors and partners to cut ties with the league and NBA.

LeBron James weighed in on the controversy between China and the NBA on Monday, saying that Houston Rockets general manager Daryl Morey "wasn't educated" when he sent a tweet in support of protesters in Hong Kong this month.

Morey's tweet of support for pro-democracy protests in Hong Kong on October 4 set off a firestorm, prompting Chinese sponsors and partners to cut ties with the league and the National Basketball Association (NBA) to answer difficult questions about free speech.

"We all talk about this freedom of speech. Yes, we all do have freedom of speech. But at times there are ramifications for the negative that can happen when you're not thinking about others," James told reporters before the Lakers' pre season game against Golden State in California. "I don't want to get into a word or sentence feud with Daryl," he added. "But I believe he wasn't educated on the situation at hand and he spoke."

Not long after the media session, James took to Twitter to clarify his statements.

"Let me clear up the confusion. I do not believe there was any consideration for the consequences and ramifications of the tweet," James tweeted. "I'm not discussing the substance. Others can talk about that."

James' tweets and statement have set off their own firestorm, with basketball fans in the US and China sounding off.

On Twitter, many users responded to his statement with anger. "Weak," said one user. Others simply posted emoji of bags of money.

On the other side of China's Great Firewall, netizens weighed in to support James, whose statements were trending on Weibo, China's equivalent to Twitter, and Douyin, a popular short video platform owned by Bytedance Ltd.

"My James is being attacked by Americans, Americans believe Morey should be supported, and James' words are basically opposing Morey," said one user on Weibo. "Sigh, I love you James, hope you can continue to be healthy and play ball!"

The Lakers played two exhibition games in China against the Brooklyn Nets last week, but the NBA canceled media availability for the teams during the trip.

A Rockets staff member also shut down a CNN reporter in Tokyo last week while trying to ask players a question about the controversy.

The league later apologized to the reporter in a statement. James is one of the few NBA representatives to speak openly about the contention.

"My team and this league just went through a difficult week," he tweeted on Monday. "I think people need to understand what a tweet or statement can do to others. And I believe nobody stopped and considered what would happen. Could have waited a week to send it."