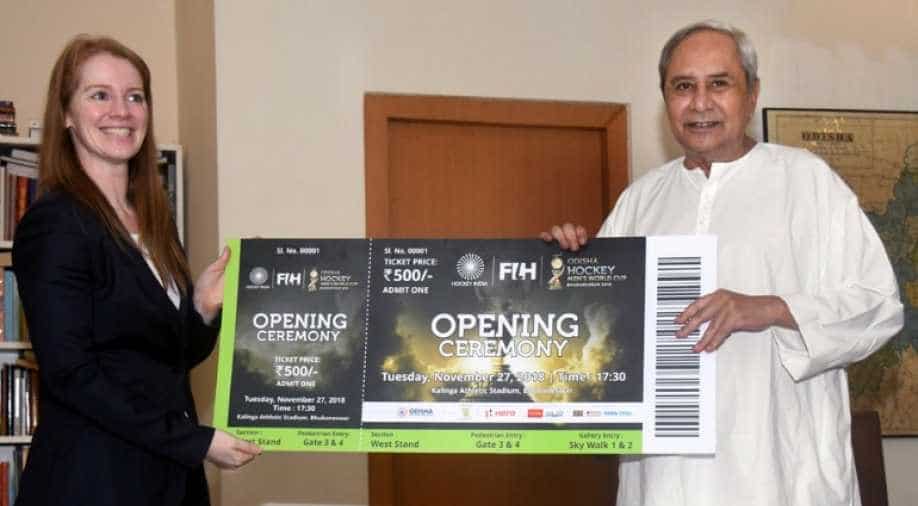 Patnaik also shared the photograph of the ticket on his official Twitter handle.

The Hockey World Cup 2018 will be held in India's Odisha from November 28 and the state chief minister Naveen Patnaik is making sure to promote the game in every way possible.

With an aim to attract maximum audience during the 19-day tournament, Patnaik purchased the first ticket for the opening ceremony of the Men's Hockey World Cup and paid Rs. 500 for it, officials said.

Hockey India CEO Elena Norman handed over the ticket to Patnaik for the ceremony that will be held at Kalinga Stadium in Bhubaneswar.

Patnaik also shared the photograph of the ticket on his official Twitter handle. A second ceremony will be held at Barabati Stadium in Cuttack on November 28.

Delighted to receive the first ticket of Odisha Hockey Men’s World Cup 2018 opening ceremony from @TheHockeyIndia. Hope fans from all over the world are ready to catch the euphoria of #HWC2018 and explore #Odisha. Looking forward to welcome you all in #Bhubaneswar pic.twitter.com/M5DebJvDLD

Hockey India announced on Sunday that online ticket sale for the ceremony of Odisha Hockey Men's World Cup Bhubaneswar 2018 will begin from Tuesday.

It has said the online ticket sales will go live at 12 noon the same day.

Around 10,500 tickets are likely to be sold for the inaugural ceremony in Bhubaneswar and 30,000 tickets for the November 28 event, sources said.