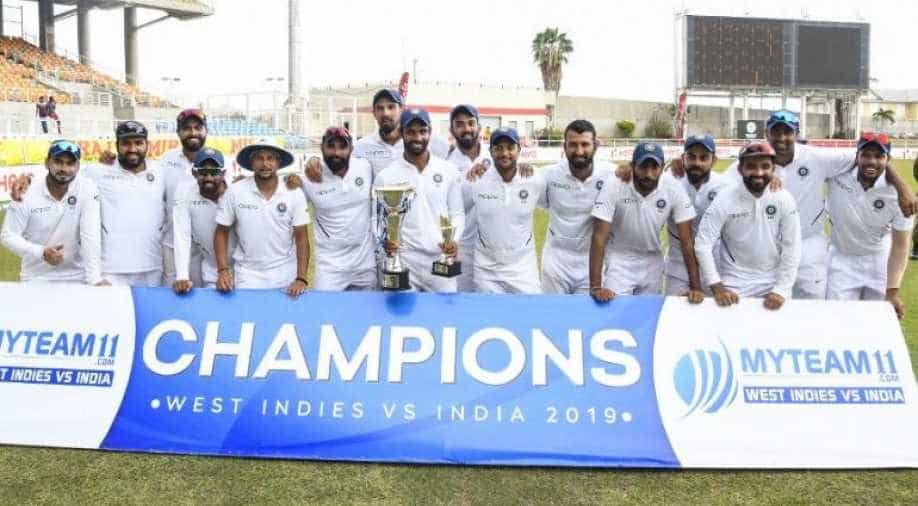 India team with trophy after winning on day 4 of the 2nd and final Test between West Indies and India. Photograph:( AFP )

Australia defeated England in the fourth Test by 185 runs to retain the Ashes and as a result, the team now has 56 points in the ongoing World Test Championship (WTC).

India recently defeated West Indies 2-0 in the two-match series to take their tally to 120 points. The series between New Zealand and Sri Lanka ended in a 1-1 draw.

Australia, however, is behind all the three teams in the ongoing WTC.

Now, one may wonder why Australia is behind India, New Zealand, and Sri Lanka despite winning two matches and drawing one against England.

As per the International Cricket Council`s (ICC) rules, all series under the WTC will be allotted 120 points each.

Ashes being a five-match series gives 24 points to a team if they record a win in a single Test match whereas a draw will give eight points.

The Tim-Paine led Australia has recorded two wins and one draw in the series so far, as a result, they have 56 points (48+8).

England has 32 (24+8) points after winning one match and drawing another.ICC had officially launched the inaugural World Test Championship (WTC) on July 29.

The championship began from August 1 as Australia and England resumed their rivalry in the Ashes.WTC comprises of the top nine Test teams in the world (Australia, Bangladesh, England, India, New Zealand, Pakistan, South Africa, Sri Lanka, and the West Indies).

In the championship, a total of 71 Test matches will be played across 27 series over two years. The top two teams will then contest in the ICC World Test Championship final in June 2021 in the UK.

Points are up for grabs during each match and each team will play three home and three away series. Each series will count for 120 points, distributed over the number of matches in a series.

The matches will be played in the same format as bilateral series but with the added context of competition and one champion team. The number of matches in each series can vary between a minimum of two matches, to a maximum of five matches.

The first cycle of the WTC consists of only five-day matches and will include day-night matches. Only matches identified as part of the WTC will count towards the championship.