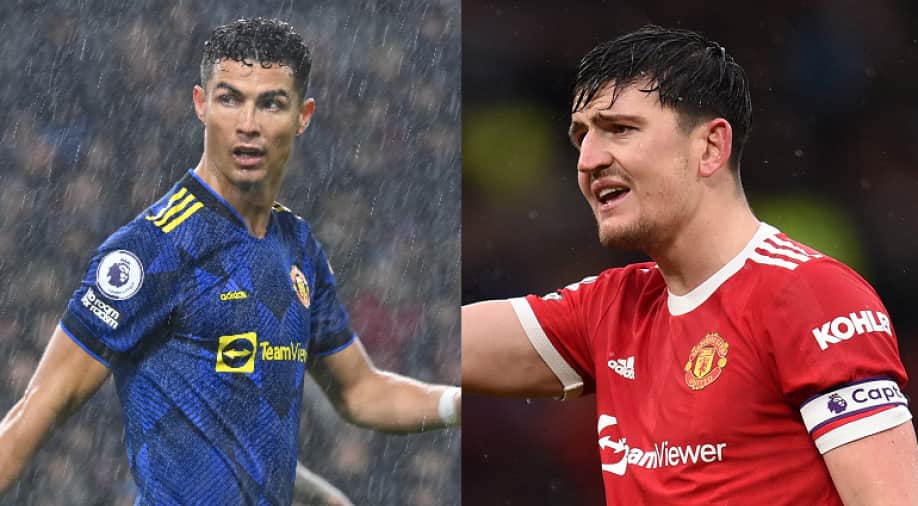 Harry Maguire has denied reports of a rift between him and Cristiano Ronaldo. Photograph:( AFP )

Manchester United captain Harry Maguire has responded to the reports of a power struggle between him and Cristiano Ronaldo at the club.

Manchester United are currently in turmoil as they desperately seek to get their Premier League campaign on track. United have not enjoyed the best of results under current interim boss Ralph Rangnick and fear missing out on a spot in the top four which will see them fail to make it to the Champions League next season.

While their on-field performances have come under the scanner, United have also been marred with several off-field issues of late. Recently, reports had surfaced stating there is a rift between club captain Harry Maguire and Cristiano Ronaldo, and that the two players are involved in a power struggle at the club.

On Friday, Maguire took to Twitter to rubbish the rumours of a power struggle between him and Ronaldo. Maguire has been below-par in a number of matches this season and reportedly feels undermined by Ronaldo's influence in the dressing room. However, Maguire has denied the reports and said the claims are not true.

“I’ve seen a lot of reports about this club that aren’t true and this is another. Not going to start posting about everything that is written but I needed to make this one clear. We’re united and focused on Sunday. Enjoy your day everyone," Maguire wrote in a tweet.

After a string of poor results, Manchester United bounced back to winning ways with a 2-0 victory over Brighton in their last Premier League outing. Ronaldo, who had gone for six games without scoring, finally managed to bring an end to his goal drought with a stunning strike against Brighton.

Manchester United jumped back into the top four in the Premier League table with their win and will be hoping to continue their winning run against Leeds United on Sunday. While Maguire has denied reports of a power tussle with Ronaldo, recent reports have suggested that Ronaldo is in talks with Rangnick to take over the captaincy from Maguire.

It is believed that the additional pressure of captaincy being taken off will help Maguire in regaining his lost form in the league. While Maguire has produced several disappointing performances, Ronaldo has also seen his performances dip on several occasions so far this season.