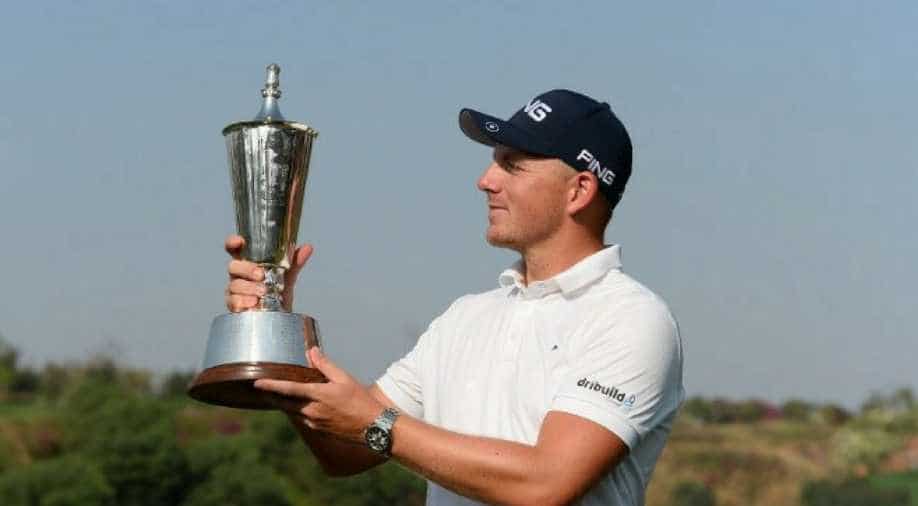 Matt Wallace poses with the trophy after winning. Photograph:( AFP )

England's Matt Wallace carded a four-under 68 to win the Indian Open golf Sunday after local favourite Shubhankar Sharma floundered in the final round to squander his joint overnight lead.

Wallace pipped compatriot Andrew Johnston in a playoff after tying on 11-under 277 at the end of the regulation 72 holes at the DLF Golf and Country Club in Gurgaon.

"I feel amazing. It was a hard week and a hard golf course but you can't be off your game," said Wallace after bagging his second European Tour title.

"I think I played great, I didn't miss too many shots. It's satisfying to master the course."

Sharma, riding high after winning two European Tour titles in the last three months, slipped down the leaderboard to finish joint seventh after a three-over 75 in the last round.

"I am disappointed obviously... these things happen and it's not an easy course," said the 21-year-old Sharma.

"I was just trying to keep up with Matt (Wallace). He was playing so well. I made a bad swing on the fifth hole which put me out of contention.

"I was trying to come back but I made another bad swing on the seventh. You can't really drop too many shots on this course and I dropped nine."

Despite his lacklustre show, Sharma continues to lead the European Tour Race to Dubai and the Asian Order of Merit.

Sharma's next big-ticket event will be the US Masters in April where he will be rubbing shoulders with the game's elite.

Sharma was invited for the Masters earlier this month, becoming just the fourth Indian ever to make it to the top-flight tournament.