From India vs Pakistan to Manchester United vs Liverpool: Could October 24 get any better? 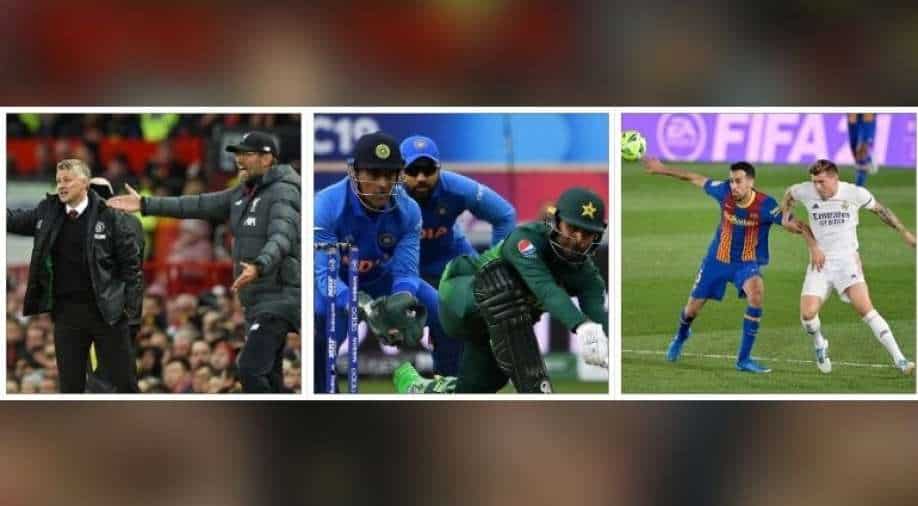 Virat Kohli-led team India will start their T20 World Cup campaign with a heavyweight clash against Pakistan on October 24 in Dubai. Photograph:( AFP )

Here's a list of clashes that just can't be missed. Check them out and mark your calendars

From Men's T20 World Cup to Premier League, October 24 should go in history as a day with the most iconic clashes being staged between fierce sports rivals. It's super Sunday for sports lovers as they will surely be glued to their TV screens with back-to-back unmissable blockbusters.

From cricket to football, here's a list of clashes that just can't be missed on Oct 24. Watch one, record some, but do check the list of all matches and mark your calendars.

Premier League fans are thrilled for the Manchester United vs Liverpool clash as this high-profile rivalry will be a treat to watch after star footballer Cristiano Ronaldo re-joined Man Utd. The match will kick off at 9:00pm IST.

The glorious history and epic rivalry between Spanish football clubs — Real Madrid and Barcelona — is set to take another turn in the absence of former Barcelona legend Lionel Messi and former star defender of Real, Sergio Ramos. Surprisingly, both will play together for French club Paris Saint-Germain. On October 24, Barca will take on Real Madrid and the match is scheduled for 7:45pm IST.

'El Clasico' is expected to be bland in the absence of some star players, but both Messi and Ramos have a chance to play (in case they are in the playing XI) on the same date as PSG is set to take on Olympique de Marseille moments after the Barca vs Madrid's La Liga clash will end. Marseille vs PSG is scheduled for 12:15am (Oct 25) IST.

Serie A: Juventus vs Inter Milan

It's a day for heavy-weight football clashes in European leagues as in Serie A, Juventus will face Inter Milan. Fans who loved to see Ronaldo play for Juventus might get disappointed, but nothing to worry about, they can watch the Portuguese star in action against Liverpool earlier in the day. Juventus vs Inter Milan is scheduled to start at 12:15am (Oct 25) IST.

Virat Kohli-led team India will start their T20 World Cup campaign with a heavyweight clash against Pakistan on October 24 in Dubai. It is a known fact that cricket rivalry between the two nations goes above and beyond and when it comes to cricket in the World Cup, it is unparalleled among fans in the South Asian cricket-crazy countries.

The bilateral series between the two has been suspended due to political reasons and previously, the arch-rivals met at the 2019 World Cup in England, where India won against Pakistan and maintained their unbeaten record in World Cups. The match will kick start at 7:30pm IST.