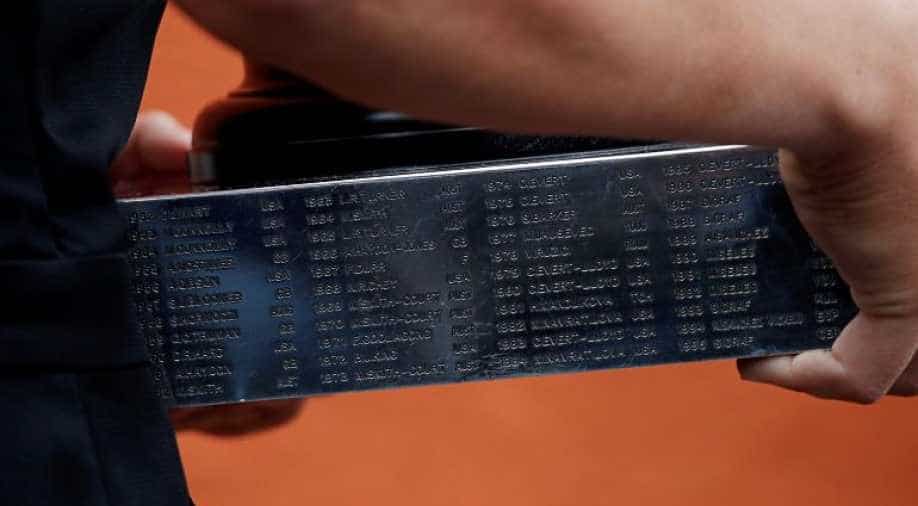 List of former winners are seen on the Suzanne Lenglen's trophy. Photograph:( Reuters )

When Ash Barty won the French Open title on Saturday she thought she was the first Australian woman to lift the Coupe Suzanne Lenglen since Margaret Court in 1973.

According to the trophy, though, there was also an Australian champion in 1976.

Clearly, nobody has told Sue Barker, the Briton who triumphed in Paris 43 years ago.

Barker, now aged 63 and from Paignton in south-west England, is a sports presenter in UK.

Back in 1976 she was a rising star and recorded her best Grand Slam result by winning in Paris aged 20, beating Czech Renata Tomanova in the final.

She reached the semi-finals of Wimbledon and the Australian Open the following year but never again played a Grand Slam final.

Galling, then, perhaps that her one moment of Grand Slam glory has been recorded for posterity on the trophy with the letters 'AUST' next to her name, denoting Australia rather than the 'GBR' for Britain.

It is not the only error on the trophy as under Barker comes 1977 champion Mima Jausovec, whose name is mis-spelt 'Jausevec'.

The name of the women's doubles trophy, the Coupe Simonne Mathieu, created in 1990, has also been mis-spelt 'Simone Mathieu' on the plaque and on the cup itself.

French Open organisers told Reuters on Sunday that the mistakes would be fixed.