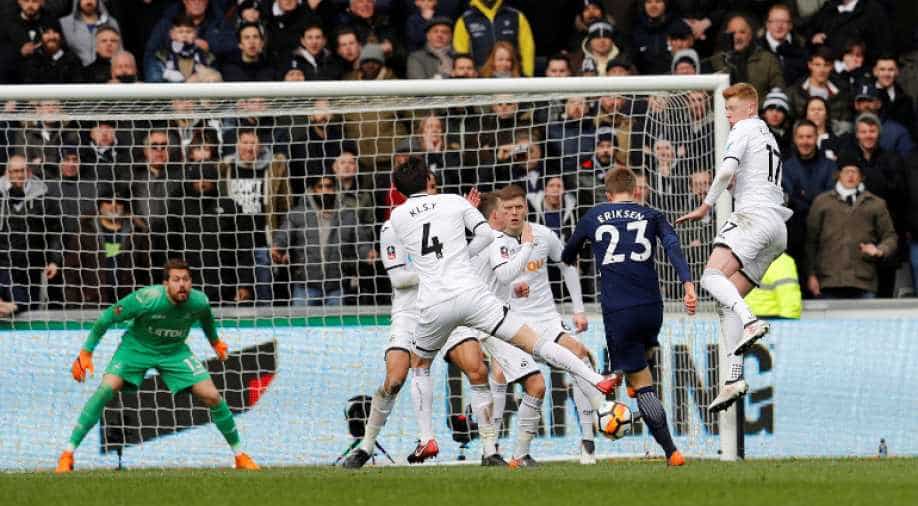 Tottenham Hotspur made light of striker Harry Kane's injury absence as Christian Eriksen scored twice in a 3-0 victory at Swansea City in a one-sided FA Cup quarter-final on Saturday.

Danish midfielder Eriksen produced a classy performance, giving Spurs the lead with an exquisite 11th-minute opener and finishing off the hosts just past the hour.

Erik Lamela was also on target for Tottenham who will now effectively have a 'home' semi-final at Wembley Stadium, their temporary home this season while their new ground is built.

Tottenham have reached back-to-back FA Cup semis for the first time since 1982, although they have lost all seven of those they have contested since they last won the Cup in 1991.

Swansea, who had lost only once in their previous 14 games under new manager Carlos Carvalhal, were in the last eight for the first time in 54 years but offered precious little.

Top scorer Kane faces several weeks out after injuring his ankle in the Premier League win at Bournemouth last week but Spurs hardly missed the England man as they strolled to victory.

They have now scored seven goals since he hobbled off early on the south coast last week.

"We're in the semi-finals, Wembley is waiting, we deserve it," Spurs manager Mauricio Pochettino, yet to mark his impressive work at the club with a trophy, said.

"Of course when you score early it makes it easy to control the game."

Swansea were without cup-tied striker Andre Ayew and his brother Jordan who was suspended, but began brightly enough with Tammy Abraham having an early chance.

But once they fell behind they appeared to have little appetite for the contest.

Eriksen is lethal when given time and space and he had both in abundance as he advanced before curling a left-foot shot past the dive of Swedish keeper Kristoffer Nordfeldt.

Tottenham's Son Heung-min then had a goal disallowed for offside -- the referee's decision being referred to the Video Assistant Referee (VAR) system for confirmation.

Eriksen also had a shot tipped onto the bar by Nordfeldt but Spurs did double their lead when Argentine Lamela showed neat footwork before stroking a right-foot shot inside the post.

Tottenham's second-choice keeper Michel Vorm, formerly of Swansea, had little to do although he made one great double save just after the break, stopping Martin Olsson's piledriver before reacting well to save Abraham's headed follow-up.

The visitors' third goal came after a long spell of possession when Eriksen arrived on the edge of the area to thump a shot past Nordfeldt who was deceived by the bounce.

Pochettino's team turned the rest of the match into a training routine as their fans chanted their traditional FA Cup song "Spurs are on their way to Wembley" with a hint of irony.

With Chelsea, who face Leicester City away on Sunday, and Manchester United, at home to Brighton & Hove Albion later on Saturday, still in the competition there is much work ahead if Tottenham are to lift the trophy for a ninth time.

For Swansea the challenge is to stay in the Premier League, having clawed their way out of the relegation zone.

"We achieved the best run in the FA Cup since 1964, this cup we gave importance to it but our main competition is trying to save the team. So now we move to the Premier," Carvalhal said.