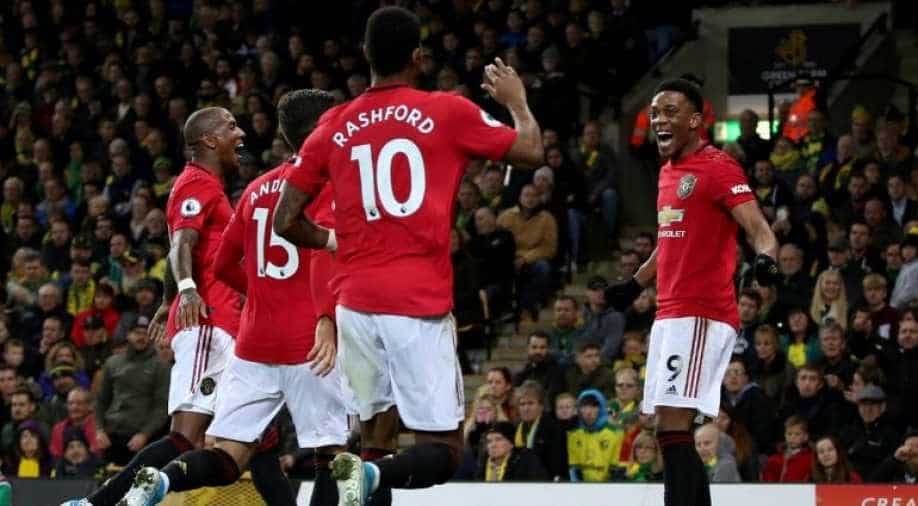 Ole Gunnar Solskjaer breathed a huge sigh of relief after Manchester United ended their eight-month wait for a Premier League away win as his side beat Norwich City 3-1 on Sunday.

After last weekend's gritty draw at Old Trafford ended Liverpool's 100 per cent start to the season, the thought of a block of four straight away league and cup games must have had Solskjaer squirming.

Yet his side, still missing Paul Pogba, saw off Partizan Belgrade in the Europa League on Thursday to clear the first hurdle.

With Norwich now also put to the sword, United will travel to Chelsea and Bournemouth in the coming week with a spring in their step.

It could have even been worse for the hosts if Canaries keeper Tim Krul had not saved penalties from Rashford and Martial after two VAR decisions controversially overruled match referee Stuart Attwell.

Reds manager Solskjaer did not dwell too long on the drama after watching his side put in a dominant performance against a Norwich side who had already stunned rivals Manchester City this season.

Solskjaer admitted: "It's been too long but it's great to have it done. But of course, the performance was the pleasing thing."

United's puzzling form has seen them able to hold their own against this season's Premier League's big hitters, taking eight points from 12 against Chelsea, Liverpool, Arsenal and Leicester.

Yet, until today they had failed to beat Southampton, Newcastle, Wolves and West Ham on the road.

The Norwegian said: "This is a difficult place to come to, but when we are as focused and concentrated and on the front foot as we were today then we can beat anyone away from home."

The most positive aspect of the performance was the chaos wreaked on the Norwich defence by in-form England striker Rashford and Martial, who has just returned from a two-month injury lay-off.

They were ably supported by Andreas Pereira and Daniel James, with Harry Maguire at the heart of a solid defence.

Solskjaer believes Martial can have a huge impact on United's season if he can stay fit.

"It was a great finish by Anthony," he said. "He's vital for us. He's a top striker, and to have him back fit, smiling and enjoying his football is a big thing for us. He's clever in his movement and one thing he's not given credit for is his defending."

McTominay punished sloppy home defending to bag United's 2000th Premier League goal midway through the first half and the visitors never looked back.

Rashford doubled United's lead when he finished off a counter-attack and Martial get on the scoresheet in the 73rd minute, curling the ball past Krul after exchanging passes with Rashford.

Norwich substitute Onel Hernandez became the first Cuban to score in the Premier League with a late consolation.

But manager Daniel Farke is sweating on the fitness of star keeper Krul, who ended the match limping down the tunnel after damaging his problem knee.

Neither manager was impressed by the two delays caused by VAR interventions.

Farke said: "Quite obviously it was a mistake. It took two minutes to overrule and it was quite obvious that the foul was on my centre back.

"We are all human beings but when you want to overrule the referee then you must be 100 per cent sure he's made a mistake."