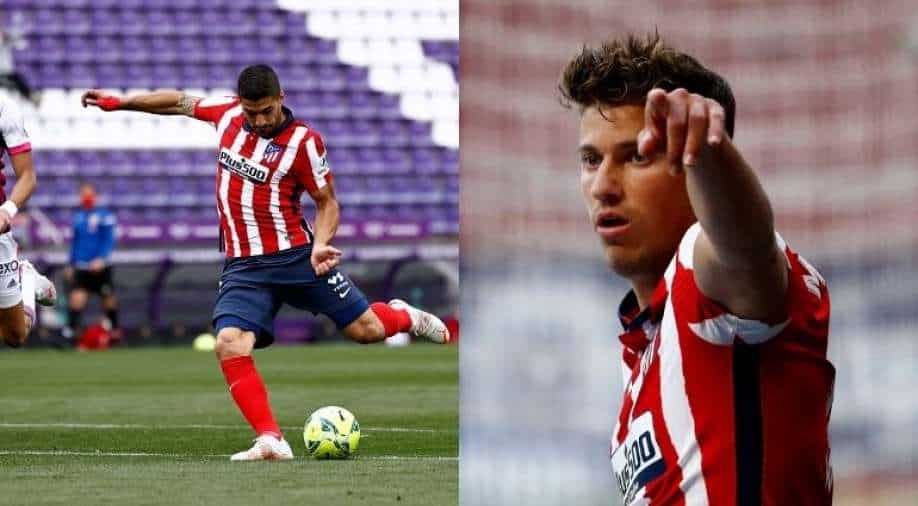 "This season has been a real struggle but now's the time to celebrate," Llorente said on Saturday.

Atletico Madrid's La Liga title triumph had many protagonists but their two standout players were undoubtedly Luis Suarez and Marcos Llorente, who fell into their laps after being spurned by rivals Barcelona and Real Madrid.

Suarez, who joined from Barca last summer for around 6 million euros, finished Atletico's top scorer with 21 goals and was decisive right until the end, grabbing the title-clinching strike in the 2-1 win at Real Valladolid on Saturday as well as firing in an 88th-minute winner against Osasuna last week.

Llorente, meanwhile, joined Atletico the previous year after being cast off by boyhood club Real. He got off to a slow start at his new side before transforming himself from a holding midfielder into an explosive winger.

The Spaniard made a name for himself in his new role last year by scoring twice to knock Liverpool out of the Champions League and has gone from strength to strength, scoring 12 goals and providing 11 assists in the title-winning campaign.

"This season has been a real struggle but now's the time to celebrate," Llorente said on Saturday.

Between them, Llorente and Suarez scored almost half of the 67 league goals which saw Atletico become champions for the first time since 2014.

Llorente's great uncle Paco Gento was one of Real Madrid's greatest ever players, while his father and grandfather also played for the club.

Real, who finished two points behind Atletico, may now be kicking themselves at letting such a talented player join their neighbours and help lead them to glory at their own expense.

But at least they managed to pocket around 40 million euros for his transfer, and they have well covered in the holding midfield role thanks to the ever-reliable Casemiro.

Barca, however, may be feeling particularly sore about parting ways with Suarez, who was forced out of the Camp Nou last summer as part of a clearout of big earners over the age of 30 which also led to Arturo Vidal and Ivan Rakitic leaving.

The Uruguayan's departure came despite the protests of Lionel Messi, who is close friends with Suarez and fiercely criticised the move.

Suarez, who became Barca's third-highest scorer with an astounding 198 goals and won four league titles there, recalled his pain at being pushed out by his former club.

"It was a difficult situation after being mistreated like that, but Atletico opened a door to me so I could keep showing I'm good enough, they put their faith in me," he said in an emotional post-match interview.

"This is very special because of how much I suffered. My statistics show I've won five league titles in seven years."

"He's a defiant guy who had just left an extraordinary club in Barcelona but he said 'I want to continue at the top' and joined a club which lives football just like he does."