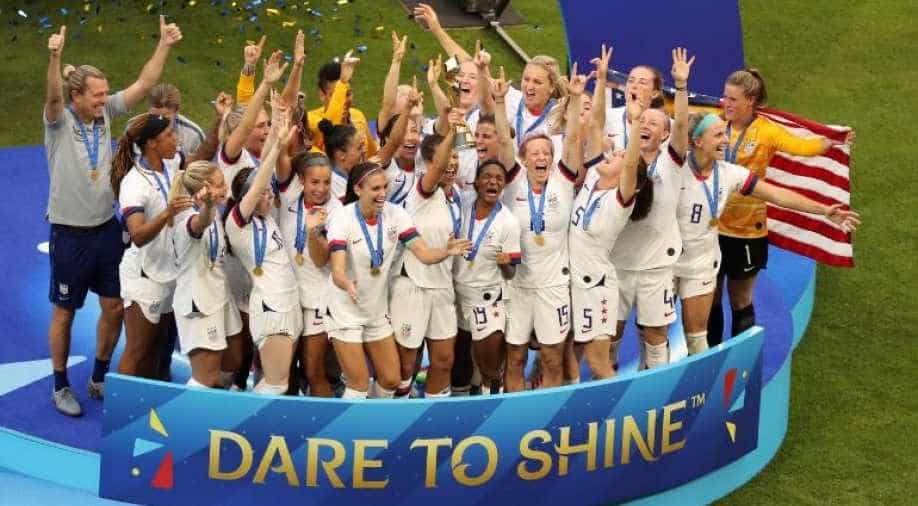 File Photo: Carli Lloyd of the US and teammates celebrate winning the Women's World Cup 2019 with the trophy Photograph:( Reuters )

Governing body FIFA plans to increase the number of teams to 32 for the tournament from 24 at this year's event in France, and a two-country format would be able to better cope with the extra fixtures.

Australia and New Zealand Friday launched a joint bid to host the 2023 Women's World Cup, which officials said would help supercharge female sport in the region.

Governing body FIFA plans to increase the number of teams to 32 for the tournament from 24 at this year's event in France, and a two-country format would be able to better cope with the extra fixtures, they said.

"We have the infrastructure, expertise and enthusiasm to co-host the FIFA Women's World Cup 2023."

He added that bringing the tournament to Australia "strongly aligns with the government's commitment to inspire more girls and women to participate in sport".

Eight nations have expressed interest in hosting the 2023 tournament, according to FIFA, with Argentina, Brazil, Colombia, Japan, South Korea and South Africa also in the running.

New Zealand Sports Minister Grant Robertson said the joint bid, under the slogan "As One", was an opportunity for the two countries to showcase their commitment to women's sport.

"New Zealand and Australia are both countries that champion and celebrate women's sport, and it has been no surprise to see the football community, stadia, host cities and states across our two countries embrace this bid," he said.

"We know New Zealand and Australia can work as a team to deliver something unique and world class, while also creating a legacy for women and for football in our countries and across Asia and Oceania."

A decision on the host is expected in May.