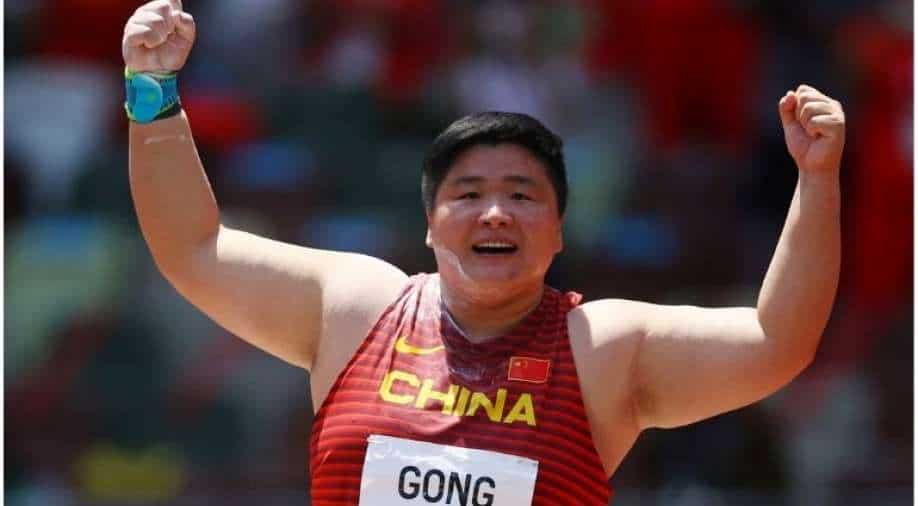 Netizens were furious after Lijiao was subjected to such sexist comments as they came out to support her on social media. They even termed the interview as "bullying" and "disgusting".

The Chinese state media has been facing flak for asking sexist questions to an Olympic athlete. The incident happened when state-owned broadcaster CCTV asked Tokyo Olympics gold-medal-winning shot-putter Gong Lijiao about her "masculine appearance" and also questioned her "plans for marriage". Not just that, the reporter went on to ask when Gong will "return to being a woman".

China's Lijiao earned praises for winning the shot put gold medal, with a personal best of 20.58 metres on her sixth and final attempt at the Tokyo Games. However, the athlete was asked questions related to her appearance instead of her outstanding performance, which led to strong criticism of Chinese state media.

As reported by the media globally, the interviewer said: "Gong Lijiao gives me the impression of a masculine woman." The reporter also asked, "You used to be a masculine woman for the sake of shot put. But moving forward, can you be yourself?"

To which Gong replied: I'll look at my plans. If I don't train then perhaps I will lose weight, get married and have children. Yes, it's the path one must take in life."

On being asked about boyfriends and arm-wrestling, she said: "I don't arm-wrestle. I'm very gentle."

Netizens were furious after Lijiao was subjected to such sexist comments as they came out to support her on social media. They even termed the interview as "bullying" and "disgusting".

On Twitter, one user commented, "Backlash over marriage question in Olympian's interview. Sounds like bullying to me. #gonglijiao love that u stood #strong & you have a sense of humour. Neither should have been necessary, you won an #gold medal not a free dating membership!"

Another Twitter user called the interview "disgusting" and wrote, "Gong Lijiao you are beautiful, you are enough, you are an Olympic medalist! Congratulations!!! #GongLijiao Your country should be ashamed for treating you the way they did."

Here are some other reactions:

China's Gong Lijiao quizzed by state media over plans for 'woman's life,' described as 'manly woman'
Gong Lijiao had a historic Olympics for her country and all she was asked was about her personal life. Gong, of China, picked up her first gold at the Olympics. pic.twitter.com/cl4sq7TZYK

Congratulations #gonglijiao for your Olympic gold. Sorry you had to put up with idiotic men from Chinese broadcaster CCTV asking you questions they would never ask any man.

Watch how she reacted after winning the gold medal:

"I think all my efforts were really worth it," Gong had said after winning the medal.

"This is my 21st year that I have been training in shot put, I really think I can break the 21 metre (mark). I didn't do it today, but it's still very exciting and I'm very happy to win this campaign," she added.