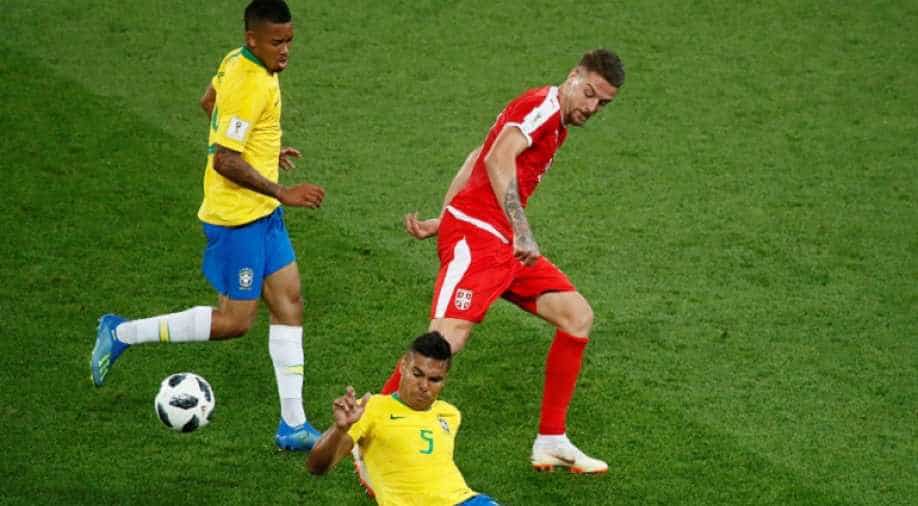 After Germany's exit and Argentina's nerve-shredding escape,&nbspBrazil&nbspmade more serene World Cup progress on Wednesday when goals by Paulinho and Thiago Silva earned them a 2-0 win over an outclassed Serbia and a knockout tie against Mexico.

The victory, and Switzerland's 2-2 draw with Costa Rica, meant&nbspBrazil&nbspfinished top of Group E on seven points, two ahead of the Swiss who will face Sweden in the last 16. Serbia ended third on three points and are eliminated along with Costa Rica.

Brazil&nbsptook a while to find their stride against a physical Serbian side who still had hopes of progress and briefly rattled the favourites, but once Paulinho put them ahead after 36 minutes they always looked comfortable and Silva's 68th-minute header settled it.

"In certain moments of the match we had some difficulties, today we suffered and we knew how to cope when we were getting attacked," Silva said.

"This is a World Cup and every opponent has quality. But when we were suffering, we knew how to stay focussed."

Playing just hours after holders Germany suffered their shock exit after a 2-0 defeat by South Korea, the five-times champions were desperate to stamp their authority on a tournament where World Cup pedigree has counted for so little.

They had yet to click in their earlier games, where they limply drew 1-1 with Switzerland and needed two stoppage-time goals to beat Costa Rica, and they didn't exactly sparkle in the first half-hour on Wednesday.

However, a superb lofted pass from just inside his own half by the outstanding Philippe Coutinho sent Paulinho clear and he stretched high to toe the ball over goalkeeper Vladimir Stojkovic and ease the pressure.

Brazil's often-overlooked defence, which has now conceded three goals in 13 games, did still have to stand up strongly against a Serbian side whose only real threat looked to be an aerial assault.

Striker Aleksandar Mitrovic roused the Serbian fans around the hour when he went close with two headers but that brief flurry proved their high-water mark as Silva finished it when he rose high to thump home a Neymar corner.

That assist was a frustrated Neymar's major contribution as he fired one shot at Stojkovic's legs after a 70-metre counter-attack, bounced another over the bar and saw the keeper palm clear his final effort of a night where he was routinely bullied off the ball and lost possession countless times.

It was not his greatest performance, nor&nbspBrazil's, but it was more than enough and they march on and remain the team everyone else will want to avoid.

"We were on the front foot in the first half except for the moment when&nbspBrazil&nbspscored," said a somewhat optimistic Serbia coach Mladen Krstajic.

"It's very difficult to play such an open game against such a football powerhouse like&nbspBrazil&nbspand these are the moments when the individual qualities of their players come through."