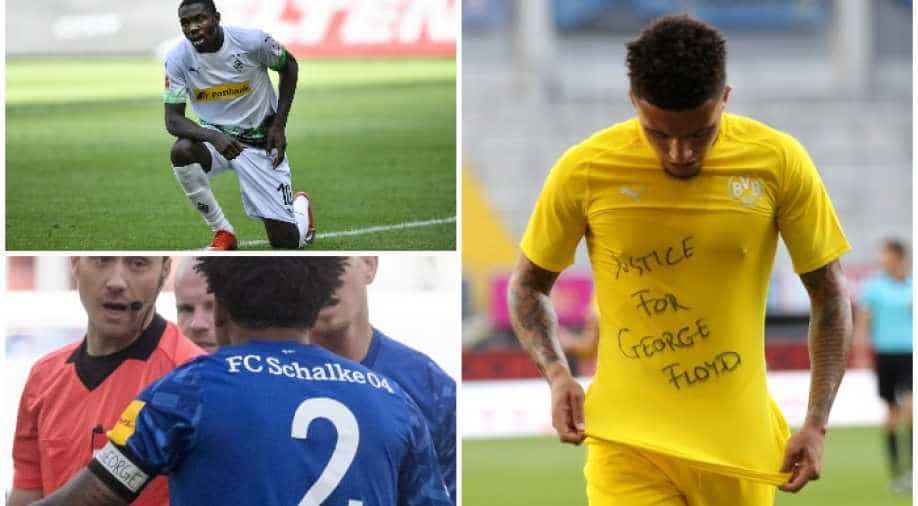 FIFA has urged football competition organisers to use “common sense” when considering whether to punish players for protesting against the death of George Floyd during matches.

FIFA has urged football competition organisers to use “common sense” when considering whether to punish players for protesting against the death of George Floyd during matches. Some players in Jadon Sancho, Achraf Hakimi, Marcus Thuram and Weston McKennie stood for #JusticeForGeorgeFloyd while celebrating a goal as a strong message against racism.

The German FA (DFB) said that it was considering sanctions against players for their demonstration this weekend. Floyd, an African-America, died in Minneapolis after a white police officer knelt on his neck, despite calls from Floyd that he could not breathe. Since Floyd’s death, Chauvin has been arrested and charged with third-degree murder and second-degree manslaughter. But protest all over the US and parts of the world have grown over the matter.

FIFA told the Associated Press: "FIFA fully understands the depth of sentiment and concerns expressed by many footballers in light of the tragic circumstances of the George Floyd case.

"The application of the laws of the game... is left for the competitions' organisers, which should use common sense and have in consideration the context surrounding the events."

IN PICS | From LeBron James to Hamilton: Sporting icons condemn US police for the death of George Floyd

Earlier, DFB vice-president Rainer Koch said: "As is the case internationally, the game itself should remain free of political statements or messages of any kind."

Sancho was shown a yellow card for removing his shirt to reveal “Justice for George Floyd” written in the under-shirt after scoring for Borussia Dortmund on Sunday. Sancho’s team-mate Hakimi joined with a similar message whereas Borussia Monchengladbach forward Marcus Thuram took a knee while Schalke’s McKennie wore an armband with “Justice for George” written on it.