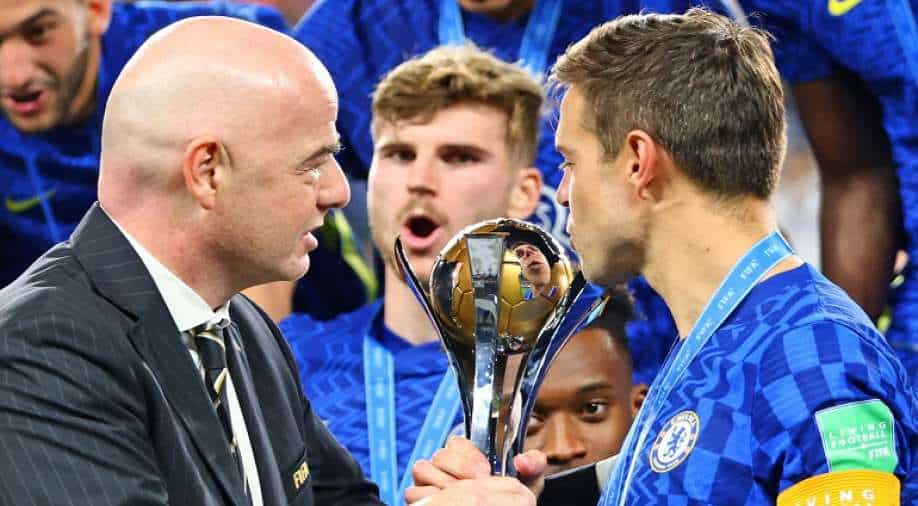 Chelsea were crowned FIFA Club World Cup champions for the first time as Kai Havertz struck home a penalty deep into extra time to break the hearts of Brazilian club Palmeiras on Saturday.

Havertz, scorer of the winning goal in last season's European Champions League final, was as cool as a cucumber as he converted in the 117th minute after Palmeiras's Luan had conceded the spot-kick with a handball.

Palmeiras's misery was complete when Luan was sent off in stoppage time for a desperate tackle on Havertz.

ALSO READ: 'This is obvious': Manchester United coach Ralf Rangnick on need of a young striker

The final in the Mohammed Bin Zayed Stadium, where around 15,000 Palmeiras fans outnumbered Chelsea supporters, took a while to come to life.

Chelsea, who lost 2012 final to Brazilian side Corinthians, became increasingly dominant though and took the lead in the 55th minute when Romelu Lukaku powered in a header.

Palmeiras hit back shortly afterwards when Thiago Silva was adjudged to have handled the ball and Raphael Veiga converted from the spot to send the Brazilian fans wild.

Chelsea looked stronger in extra time but a penalty shootout loomed until Luan's raised arm was struck by Cesar Azpilicueta's volley from close range and after a VAR check referee Chris Beath went to check a pitch-side monitor.

He returned to point to the spot and Havertz did the rest.

ALSO READ: Christian Eriksen unveiled at Brentford, says he is determined to prove he is still the same player

Since taking charge a little over a year ago Chelsea manager Thomas Tuchel, who was in attendance after missing the semi-final because of a positive COVID-19 test, has now earned Chelsea the European and world club crowns.

"It never stops. We want to keep on winning trophies," Tuchel said in a pitch-side interview before his team were given their medals by FIFA president Gianni Infantino.

"In the end, if you score late you need the luck to do it but we were relentless and we did not stop trying."

Palmeiras had been bidding to become the fourth Brazilian club to win the inter-continental tournament since 2000.

The South American club champions worked like Trojans to keep Chelsea in check and Tuchel's side laboured early on.

They were not helped when Mason Mount, one of four changes to the side that started against Al-Hilal in the semi-final on Wednesday, was forced off with an injury.

Palmeiras settled into the game and in Dudu, they had a real threat with the midfielder firing narrowly over before flashing another effort wide of Edouard Mendy's post.

Chelsea rarely threatened in the first half but they took the lead in clinical fashion 10 minutes after halftime.

Callum Hudson-Odoi, who had been wasteful, got to the byline and his cross was perfect for Lukaku who headed past Weverton.

The lead did not last long though as Brazilian Thiago went up to clear a cross but the ball struck his raised arm and Veiga fired the spot-kick inside Mendy's left-hand post.

Chelsea moved up a gear with Havertz just missing the target with a thunderous shot from an angle before Christian Pulisic, who replaced Mount, went close with a shot.

The Premier League club continued to turn the screw in extra time with Palmeiras beginning to flag.

Pulisic's low cross was deflected up onto the woodwork as Palmeiras dug deep. But the Brazilians' resistance was finally pierced as Havertz again showed an appetite for the big occasion to keep Chelsea`s trophy machine rumbling on.

For Palmeiras there were tears, but no shame.

"I'm going to ban my players from not celebrating second place," manager Abel Ferreira said. "Woe to them if they get on the plane and don't have a beer. If you don't, you'll have to deal with me. I'm proud of what we did."