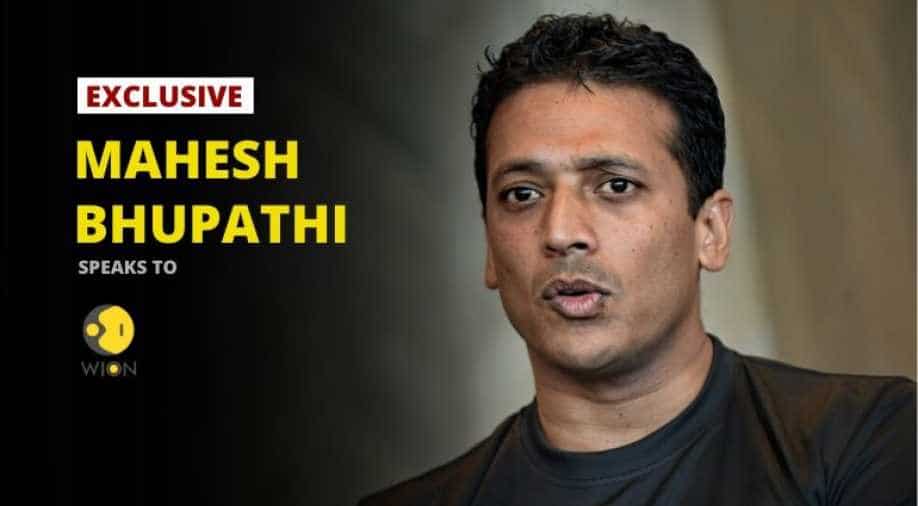 Mahesh Bhupathi in an exclusive chat with WION Photograph:( AP )

Ace Indian tennis player, Mahesh Bhupathi, in an exclusive interview with WION’s Sports Editor, Digvijay Singh Deo, gave his reactions to the cancellation of Wimbledon and opened up about a lot of things ranging from the idea of playing behind closed doors, the future of Roger Federer, tennis after COVID-19 pandemic, how he is spending his time during lockdown and much more.

The COVID-19 pandemic has left the entire sporting calendar shattered and tennis is one of the sports to be most affected by the dreaded virus. The AELTC on Wednesday announced that Wimbledon stands cancelled due to public health concerns linked to the dreaded virus and the 134th edition of the Championships will be staged from June 28, 2021, to July 11, 2021. Earlier, the Rolland-Garros was postponed and will now be played from September 20 to October 4, 2020.

While tennis players are bound to be a bit disappointed with the Wimbledon getting cancelled, but with the entire world facing an unprecedented scenario with the COVID-19 pandemic, this comes as a welcome move given the health concerns of everyone associated with the tournament.

Ace Indian tennis player, Mahesh Bhupathi, in an exclusive interview with WION’s Sports Editor, Digvijay Singh Deo, gave his reactions to the cancellation of Wimbledon and opened up about a lot of things ranging from the idea of playing behind closed doors, the future of Roger Federer, tennis after COVID-19 pandemic, how he is spending his time during lockdown and much more.

Digvijay Singh Deo: Joined by one of the stalwarts of Indian sport and a three-time Wimbledon champion Mahesh Bhupathi. First reactions Mahesh, are you sad at the cancellation or was it inevitable?

MB: As a tennis fan, I am heartbroken. Wimbledon has always been the epicenter of our sport. Even since I retired, I have spent every summer in London watching matches at sw19. But as sad as I am, the decision was expected given how serious the COVID-19 virus is, but hopefully, the situation will improve in the coming months and the sport will return soon.

DSD: I’m going to play devils advocate here, Is it not too early to make that call, we are in early April? Wimbledon was scheduled for the end of June-almost three months away. The likes of Boris Becker were saying wait for some more time.

MB: No I don't think so. A tournament of the magnitude of Wimbledon, within the time frame that it takes place in, generates a lot of revenue and involves a lot of planning. So all relevant stakeholders were consulted before the decision was taken. I know a lot of people in London who have contracted the virus and think the situation is only going to get worse, so I think the right decision was taken. A lot of factors have to be considered a lot of preparation goes into an event like this- for example, ball boys are trained from all over the world. So Wimbledon is always meticulous in their planning, and they felt like they wouldn't be able to do justice to the event. 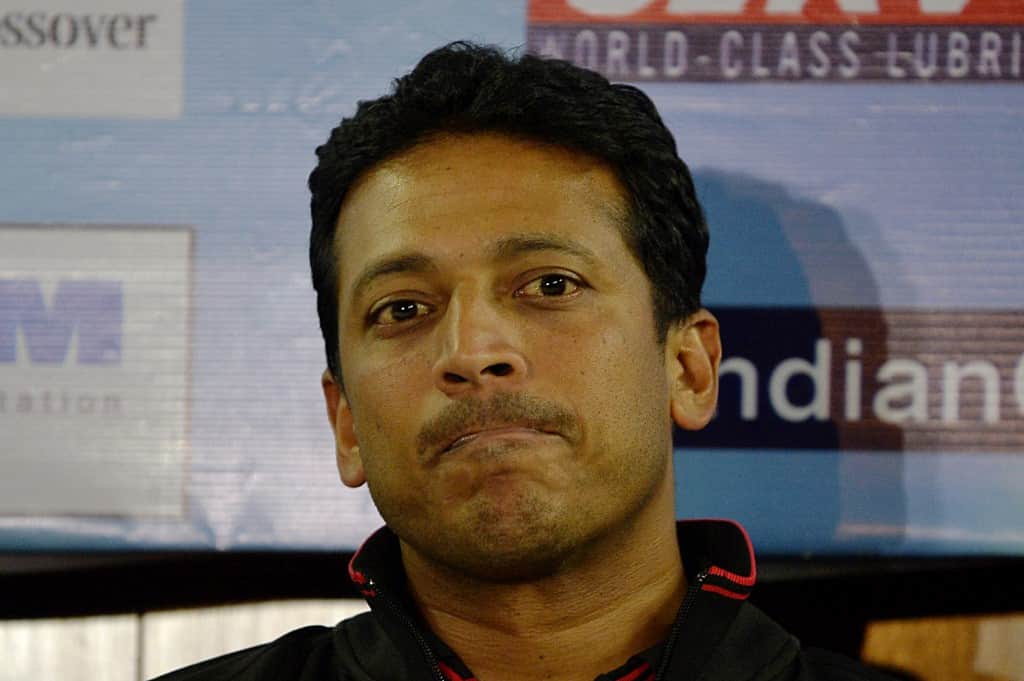 DSD: There also existed the option of playing behind closed doors, probably not the spectacle we would have wanted but across the world sporting bodies are waking up to that reality. Even England’s cricket world cup winning captain, Eoin Morgan offered the same solution to sports administrators on Wednesday. Do you think they should have been open to that idea?

MB: I don't think playing without spectators is fair on the athletes, part of the experience is competing in front of packed houses which create the atmosphere and make the game more competitive. That's the setting in which an athlete thrives don't think it’s right to protect the fans and not the players or those people involved in the event. The players, umpires, ball boys and some staff will be present on the ground even if the tournament is held behind closed doors. So is it fair to put their health at risk to generate some TV revenue?

DSD: There have been lots of reactions coming in across the board and predictably lots of disappointments. Why is Wimbledon so special to the players?

MB: Wimbledon has always been and will continue to be the mecca of tennis. That is where the tennis world congregates once a year. Every grand slam winner and all the sport's big guns-past and present-  are at the tournament. It's a celebration of the sport and that's something that the players will obviously miss. But at this time the health of the players and their families comes first.

DSD: What you can’t control is father time and two of the most quoted reactions when it comes to the cancellation of Wimbledon are those of Roger Federer and Serena Williams, for both Wimbledon seemed to be a logical shot at winning another slam

MB: The effect of the virus is going to be fairly significant when it comes to rewriting the history of the sport. This year's Wimbledon was probably Federer’s best opportunity to distance himself from his great rivals Rafael Nadal and Djokovic, in terms of the number of majors won. Serena Williams as well would have seen the tournament as a great opportunity to equal Margaret Court's record of 24 grand slam singles titles.

I hope both of them are back for the tournament in 2021, but I think maybe 10 years down the line when we look back at this period, this break could be a significant chapter in the history of the sport.

DSD: This current lockdown could work out well for Federer, he took a break to have surgery and now he isn’t losing any ranking points with the Olympics now shifted by a year, you get the feeling that 2021 will be his goodbye year.

MB: I’ve learnt the hard way over the last few years that you must not write off Roger Federer. Even four years ago, many were saying that Wimbledon could be his last slam, but that obviously wasn't the case. He has the incredible ability to play only 10 or 12 tournaments in a year, but play them at the highest level, which is partly god gifted.

I wouldn't be surprised if Federer continues to play for another 2-3 years. But all the tennis players are getting a bit restless, not being able to play is something they have not known, so it is very frustrating for them.

DSD: There are some who feel the entire tennis season is under threat, you need immense fitness in this sport, the confines of the home and gyms aren’t going to get you match fit.

MB: when you are unable to train, you lose your cardio conditioning and getting that back doesn't happen overnight. I'm not sure if the entire season is finished, as the virus subsides, tournaments will come thick and fast. I think the offseason will definitely be cancelled. The ATP & WTA will try and organise as many events as they can at the end of the year.

DSD: There is also the question of player livelihoods. The top fifty probably have the capacity to withstand the tours shutting down but there is a serious problem down the rung.

MB: Some tennis players get paid a lot of money, but anyone below the ranking of 50 are not getting any income, their coaches aren't getting any money. The whole ecosystem of the sport is at a standstill, and I think the ATP & the WTA have to quickly figure things out for the near future.

DSD: When you then look at that situation globally there are so many players who play on the Challenger Tour, the ITF Circuit, some for as much as 3000 dollars winning cheques. All of them have been essentially furloughed too and don’t have any government programs to bank upon. And how are the Indian players managing during these tough times?

MB: These are tough times for not just the players who are ranked in the 200s, but even for the players ranked outside the top 50, they have absolutely no income. India's Sumit Nagal is currently in an academy in Germany and I’m sure he's struggling every week because there's no money to be made.

I don't know what the exact solution to the problem is, but I’m sure the ATP & WTA working on something. There have been significant contributions the tours have made to the pension plans over the last few years, so I think if they declare 'force majeure', they can get some money in the players' hands, which is crucial.

DSD: Do you think the ITF, the ATP tour and the WTA tour and other bodies have the capacity to come up with a sort of relief package for players? Yes, tournaments also are facing the brunt but most have insurance…

MB: Yes, it's a pretty bad situation for the players, for example, if you're working for a company or play professionally for a team, most of the organisations are standing by their employees in these times by guaranteeing their jobs, even if there is a pay cut involved. But where tennis is concerned, it's an individual sport, so you're not employed by anyone and you're not getting a paycheque. So unless the tours are able to figure things out quickly, there will be more than just frustration from the players' side in a few months.

DSD: The French Open has been unilaterally pushed back to September - same dates as Federer’s Laver Cup. How is that clash going to pan out in your opinion, it is unheard of players skipping grand slam in this era?

MB: I think once the season resumes, if and when it does, events like the French open and Laver Cup, which are clashing will have to come to a compromise. I do not see any top players skipping the French Open, it's another slam to be won and none of Nadal, Djokovic and Federer would want the other to get ahead in the race. But if anyone skips it, it might be Federer because of his involvement with the Laver Cup. But apart from that, there has to be a compromise. Everyone is renegotiating what they committed to for the long term. That is the only way forward at this point in time.

DSD: For you personally what’s the schedule like during the lockdown, getting back to fitness is something I can see on your social media profiles.

MB: I try to exercise once a day at least and of course I have an eight-year-old daughter at home, so we have to keep her entertained the whole day, which is not an easy task. She's dying to get back to school, luckily for us she has online classes from Monday, so half the day is taken care of. But other than that just killing time and trying to catch up with as many friends as possible, making sure they're fine.

DSD: You once had an e-mail id called Mahesh no 1, this was to do with the Govinda films of the nineties and not your world ranking at the time in doubles. Lots of movie watching for you at this time or you have already binge-watched most of what is available online?

MB: Yes, I’m mostly watching re-runs of shows. But luckily new seasons of various series keep coming up, so there's something to binge on most of the time. Recently I saw 'Student of the Year' and 'Tanhaji' with my daughter. She enjoys watching the classics and I love giving her company.