'Everest Twins' hit a high on the Swiss Alps, aim to keep climbing 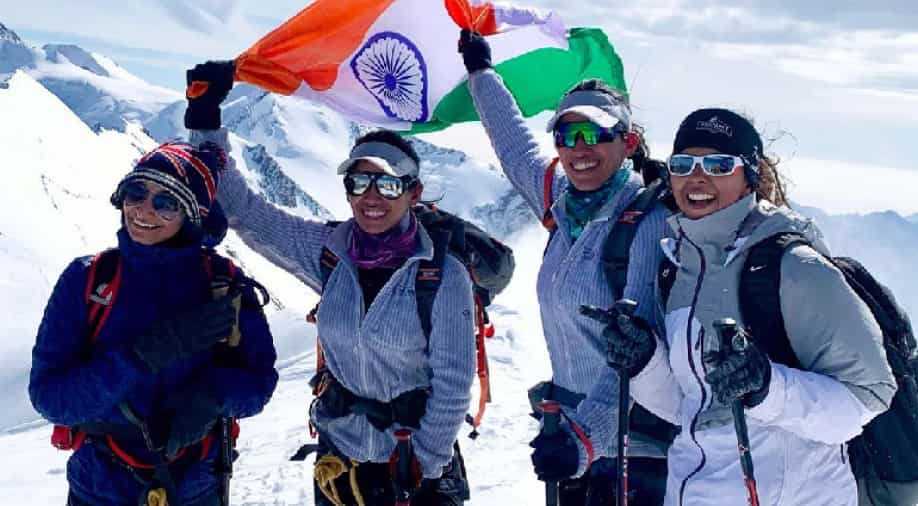 Tashi and Nungshi Malik, the first twin sisters to climb the Mount Everest together, are on a high after having summited two 4,000 m (13,000 ft) peaks in the Swiss Alps as part of the Switzerland 100 per cent Women Peak Challenge. The duo termed it as an out of the world experience and aim to continue conquering more peaks in future. "Well, we just completed our expedition.

We did three mountains - Allalinhorn (13,212 ft), Breithorn (13,662 ft) and Riffelhorn (9603 ft) in three days and we were absolutely stoked. "We had only dreamt about it ourselves, but to finally make it to Switzerland and to successfully summit with a women-only team for this 100 per cent Women's Peak Challenge was truly an out of this world experience for us. It went very well, we must say," the duo known as the 'Everest Twins" told PTI in an interaction from Switzerland.

The Malik sisters from Dehradun are the first siblings and twins to climb the Seven Summits, to reach the North and South Poles, and complete the Adventurers Grand Slam and Three Poles Challenge.

They have several accomplishments in mountaineering which came after standing on the summit of Mount Rudugaira in the Indian Himalayas. It made them change their perspective.

"We started when we were 18, it was absolutely by default. We had no idea we would be climbers. But standing on the summit of our first big mountain- the Mt Rudugaira in the Indian Himalayas truly changed our perspective on what women and girls can do and it felt very empowering being on the top.

"After that day, we knew this was a passion waiting to be discovered and we've never looked back since," the duo said.

Nungshi said the notion that mountaineering is a male preserve was changing with more women setting records. "...Mountaineering is generally viewed as a male preserve and women taking it up has been looked down upon. But, I think slowly the trend is changing as more and more women are setting records in the climbing space to show that we can also do it well.

"Recently, there has been a spurt of enthusiasm with more and more people wanting to take up adventure sports including mountaineering." She said right now, across the world, women adventurers only comprise 15 per cent of the total adventurers globally.

"But we are hoping this number will rise in the next decade or so since people are now becoming more aware of how powerful this sport is," Nungshi said. "And there are probably newer avenues that are opening up for some of us like this 100 per cent Women Peak Challenge/ It is a great initiative that Switzerland Tourism has taken up to encourage more women to come outdoors and climb the peaks together in women-only teaks."

She said out of the seven summits, the one in North America 00 Mount McKinley was one of the tougher climbs because it was very technical.

"There are no sherpas on the mountain, so you are doing everything yourself and it is for only professional climbers. That climb really set the tone for us climbing extreme peaks which require a different skill altogether," she added.

Mountaineering is an expensive sport, Nunghsi said, adding: "having set so many world records, we still face so many challenges when it comes to financing our trip."

Asked how they sustain themselves amid the challenges, Nungshi said, "As of now, Tash and I deliver a lot of motivational talks where we get a large amount of our revenue and we have a few ambassadorial contracts with gear manufacturing companies."

Asked how much the pandemic disrupted their mountaineering and participation in other events, Nungshi said, "We've been homebound for almost a year-and-half and couldn't climb much. I think it's been a tough year for everyone and it certainly affected us too because we were so used to travelling and being on the road.

"So Switzerland was almost a saviour. It feels surreal to be able to travel without a mask because who would have thought that, within a year, post the pandemic you would be able to achieve something like that. For us, this in particular has been a game changer in that sense," she added.

Mountaineering requires a basic level of fitness and the duo try to train for at least a month before embarking on expeditions. "For expeditions, we have to make sure that our endurance is up because we have to climb for almost 8 to 10 hours; so we never compromise on training and keeping ourselves fit. We also keep ourselves mentally strong with yoga and meditation," Nungshi added.