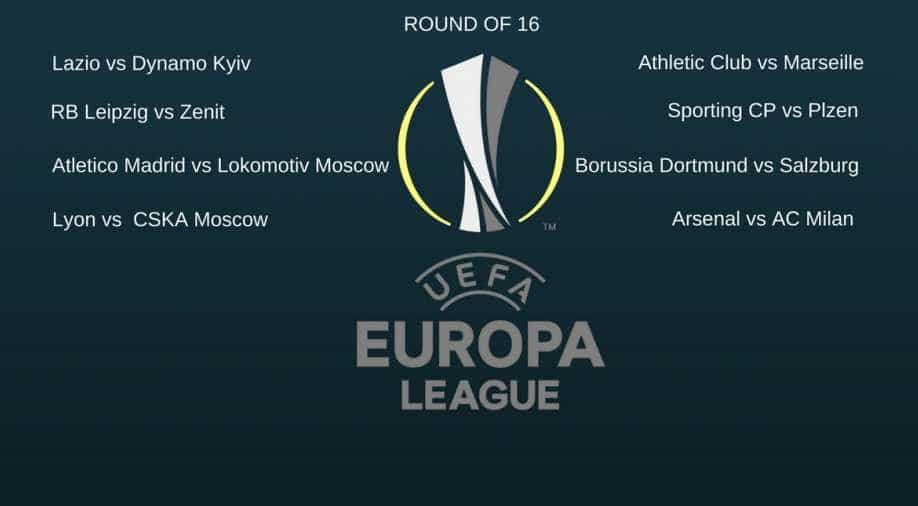 The official draw for round of 16 of UEFA Europa League is out as the second Leg was concluded on Thursday but with some bittersweet memories. A lot of things happened in the Leg 2 of the round of 32. On one hand, some mediocre clubs fought their ways back and entered last 16 but on the other hand, one Basque police officer died on Thursday as security forces clashed with fans of Russian club Spartak Moscow in the Spanish city of Bilbao. Arsenal, the north London giants survived entry to Leg 2 because of a 4-2 win on aggregate despite 2-1 second-leg defeat by Ostersunds. The Swedish club displayed a quality run and gave a tough fight Arsenal. Here is the result of draw:

Arsenal struggled to overcome Swedish minnows Ostersunds in the last round, being booed off by their fans at the Emirates after losing 2-1 on Thursday but going through 4-2 win on aggregate.

Bilbao will face 1993 European champions Marseille for the matches on March 8 and 15.

Another French side, Lyon, must overcome CSKA Moscow to keep alive their hopes of appearing in the final which will be played at their own stadium on May 16.

Lyon were comfortable 4-1 aggregate winners over Villarreal in the round of 32 and former club stalwart Bernard Lacombe welcomed the draw which sees the second leg played in France.

"We qualified well against Villarreal, who is a good club. Obviously, it would be fantastic to play in our own stadium (in the final) but there are high-level opponents left in the competition and we have to respect that," he told beIN Sports.

RB Leipzig, who dropped into the competition after being eliminated from the Champions League, will play Zenit Saint-Petersburg, who won the Europa League in 2008.

The official result of the Round of 16 #UELdraw!

It had to be hat-trick hero and goalscoring sensation @ciroimmobile ????????????#UEL pic.twitter.com/LEVfxZM3Vq