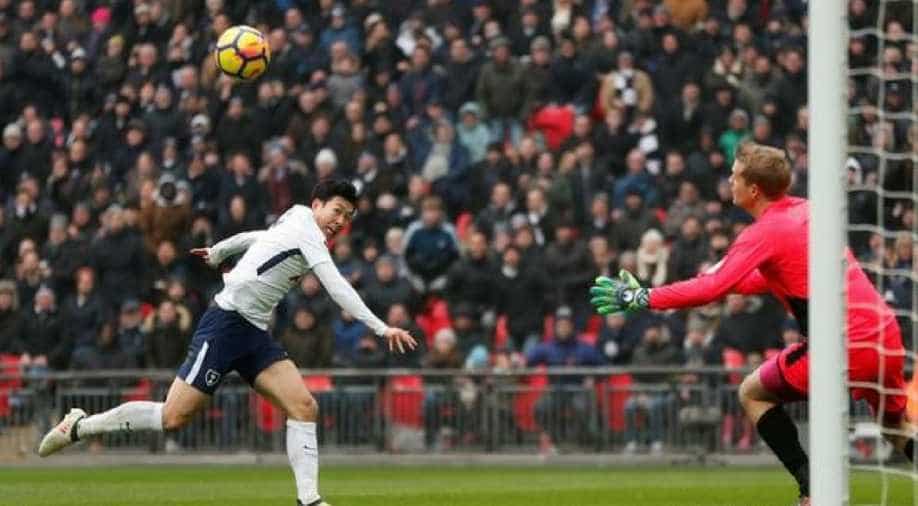 Tottenham's Son Heung-min in action during the match. Photograph:( Reuters )

Tottenham Hotspur apparently affected early in the season by playing home games at Wembley, achieved a sixth straight win there by beating Huddersfield Town 2-0 with a double by Son Heung-min in the Premier League on Saturday.

It was their 17th game unbeaten in all competitions and moved them up to provisional third place, a point ahead of Liverpool, who were playing later at home to Newcastle United.

South Korean Son Heung-min gave Spurs a halftime lead and added the second with a header from Harry Kane's superb cross before being substituted to an ovation.

"We feel comfortable at Wembley, we enjoy playing here," Son said after scoring four times this week at the national stadium where Tottenham are playing while they build a new home ground.

Spurs, who did not win in their first three league games there, are a point behind second-placed Manchester United, who play at Crystal Palace on Monday and five ahead of fifth-placed Chelsea, who visit runaway leaders Manchester City on Sunday.

The defeat pushed Huddersfield right back into the relegation mix, only three points above the bottom three, after winning their two previous games.

Swansea City were the big winners at the bottom, moving above five teams to 13th, including West Ham United who they beat 4-1.

The first half was extended by 10 minutes after a bad injury to West Ham's New Zealand defender Winston Reid and by the interval the visitors were two goals down.

Ki Sung-Yeung scored the first after nine minutes and the unmarked Mike van der Hoon added a second in the 32nd.

West Ham manager David Moyes, whose team travelled seven hours by coach to reach Swansea from London on Friday after their flight was cancelled, was bitterly disappointed with the performance, their worst since he took over in November.

"I'm embarrassed," he told reporters. "We played so bad. I couldn't assess it, it was that poor. The fans travelled through the snow to get here and we let them down badly. That was the poorest performance since I came here."

Since he joined the club at the end of December with Swansea bottom they have won five league games and lost only two.

In contrast, West Bromwich Albion's change of manager in the same month has not paid off.

Alan Pardew's job appears to be under greater threat than ever after a 1-0 defeat at Watford.

Albion has now won one of 15 league games since Pardew took over at the start of December and are seven points adrift at the bottom of the table.

Watford captain Troy Deeney was sent clear by Will Hughes to score the only goal.

"The players gave me everything today and I cannot ask for more than that," Pardew said.

"It is tough but it isn't about me, it about West Brom and it is tough for the fans and the players."

Stoke City stayed second-bottom but earned a valuable point in a 0-0 draw at Southampton.

Burnley supporters must have despaired when their team went a goal down at home to Everton. Sean Dyche's team have never won a Premier League game after falling behind.

This time they did, however, celebrating Dyche's 250th game as manager by winning 2-1 with goals from Ashley Barnes and substitute Chris Wood.

Everton captain Ashley Williams was sent off four minutes from the end for a wild swipe at Barnes.