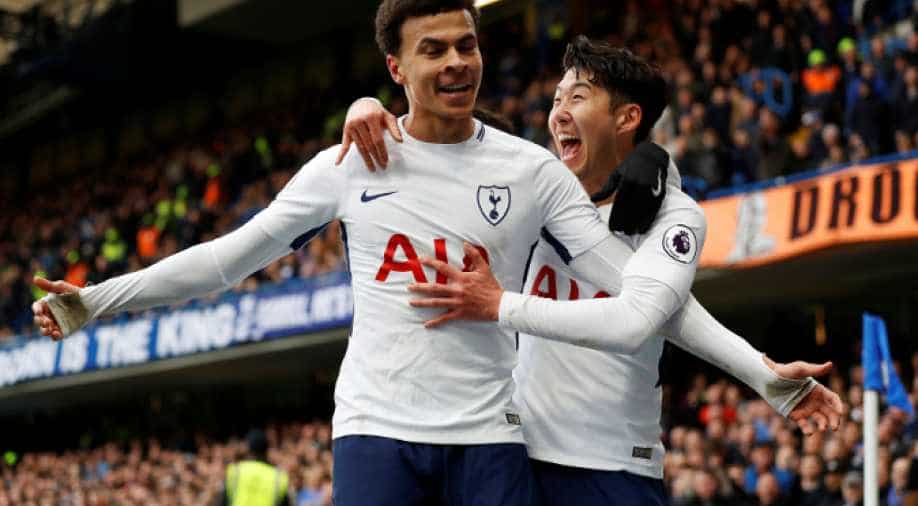 Tottenham Hotspur ended 28 years of hurt and took a massive stride in the race for a top-four finish in the Premier League as Dele Alli struck twice in a 3-1 victory at Chelsea on Sunday.

Not since Gary Lineker scored the winning goal in 1990 had Tottenham taken three points home from Stamford Bridge and in 2016 their title hopes were ended by the Blues in a rumbustious draw dubbed the 'Battle of the Bridge'.

Fourth-placed Tottenham, unbeaten in the league since December, began the day five points clear of Chelsea, but it looked like being a familiar tale of woe when Alvaro Morata punished a Hugo Lloris mistake to head the hosts in front.

Christian Eriksen bamboozled Willy Caballero with a dipping effort just before the break though and Alli, whose form and temperament has been questioned of late, struck twice in four minutes in the second half.

The sight of fit-again Harry Kane coming on as a substitute added to the joy of Tottenham's fans who could finally celebrate at Stamford Bridge after 27 league games there without a win -- a run of 18 defeats and nine draws.

Tottenham have 64 points to Chelsea's 56 with seven games remaining. Spurs are only two points behind third-placed Liverpool, having played a game less.

"After 28 years it is important to win here. It's a happy day for everyone -- fans, players -- and we feel very proud," Tottenham manager Mauricio Pochettino said.

"We dominated the game but Chelsea created the chances and scored. In the second half we were much better and we deserved the victory. The players deserve praise because we showed character at 1-0 down. It's a day to feel very proud."

But once the whistle went hostilities resumed -- even if the match never threatened to boil over.

Tottenham were assured in possession but vulnerable to Chelsea's rapid attacks -- twice needing Lloris to make saves from Willian and Victor Moses.

Lloris was badly at fault though in the 30th minute when he flapped at a Moses cross and Morata nodded in his 11th league goal of the season.

For a while, Tottenham looked jittery but Eriksen tested Caballero with one stinging shot before equalising just before the break with a sensational strike.

Moses gave the ball away and when the ball was worked to the Dane he took aim and fired a right-foot shot from 30 yards that dipped over Caballero who was playing in place of the injured Thibaut Courtois.

Son Heung-min tested Caballero with a curling left-foot shot after the break but Tottenham went ahead in the 62nd minute when Alli, playing his 100th Premier League game for the club, timed his run to perfection. He took down Eric Dier's pass and fired the ball past Chelsea's keeper.

Alli was left out of England's friendly matches against the Netherlands and Italy and he has come under fire for diving this season but he answered his critics again four minutes later.

Son caused more panic in the Chelsea defence and after the South Korean had two efforts blocked, the ball fell to Alli who took a touch before firing home.

Tottenham's fans celebrated long and loud after the final whistle sounded and they will now be confident of watching Champions League football in their new stadium next season.

Cricket: 'They know him': Sachin Tendulkar talks about Rahul Dravid, the coach