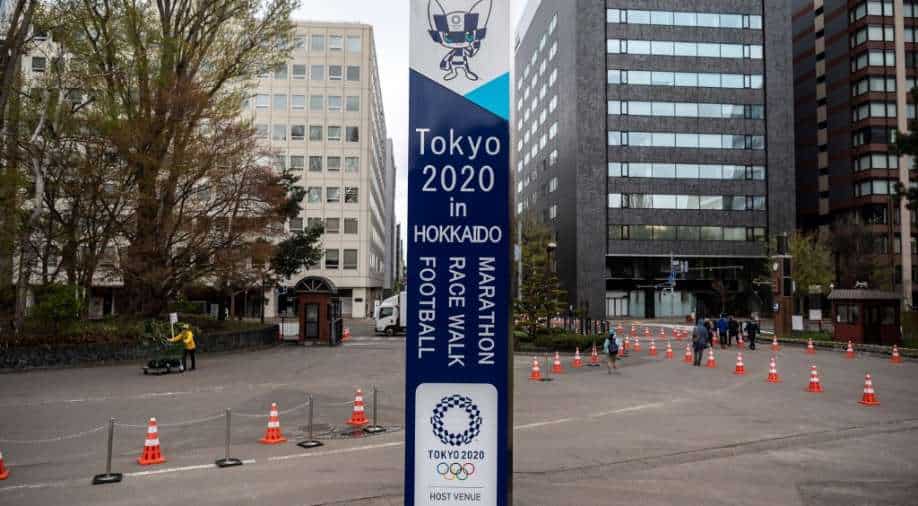 Spectators were urged to stay away as a subdued Tokyo Olympics marathon rehearsal took place under strict anti-coronavirus conditions in Sapporo on Wednesday, as officials grapple with a rise in infections and public antipathy to the Games.

Spectators were urged to stay away as a subdued Tokyo Olympics marathon rehearsal took place under strict anti-coronavirus conditions in Sapporo on Wednesday, as officials grapple with a rise in infections and public antipathy to the Games.

Security guards stood with signs around their necks asking people to "please refrain from watching the race" to prevent infections as the event unfolded in a muted atmosphere in the northern city.

The marathon was at the centre of controversy in the original build-up to the 2020 Games, when it was moved to Sapporo from Tokyo to avoid the capital's punishing summer heat.

Wednesday's test attracted disquiet for different reasons, as residents voiced concerns about its potential for spreading the virus.

"We are doing what we can to contain the coronavirus," Shuji Miura, who manages a cafe along the route, told the Asahi Shimbun.

"But it will be completely useless if they hold the rehearsal event before we see any result."

Polls show the majority of people in Japan want a cancellation or further postponement of the 2020 Games, which are due to open on July 23.

Tokyo, Osaka and other regions are currently under a coronavirus state of emergency to bring down surging cases, while the country's vaccine roll-out has been progressing slowly.

World Athletics president Sebastian Coe said he could understand the "nervousness" in Japan about holding the Olympics during the pandemic.

"We have Covid protocols that have been tried and tested, and I've witnessed them here this morning. We take very seriously the health and wellbeing of local communities."

Coe, who was head of the 2012 London Olympics, said it was "really important that when the world looks to coming out of Covid, coming out of the pandemic, that it can see optimism".

"The Olympic Games and the Paralympic Games will be totemic of that optimism and hope going forward. So it is important that the Games are delivered successfully, and they're delivered safely," he added.

Overseas competitors had to take Covid-19 tests before their departure and on arrival in Japan, and were also tested daily before the event, as will happen at the Olympics.

Mori said no one had tested positive for Covid-19, with the athletes made to stay in hotels with no contact with the public.

Coe said he was sure people in Sapporo, which hosted the 1972 Winter Olympics, would eventually be glad of welcoming the marathon.

"I'm also very sure that the people of Sapporo will be proud historically to be able to claim that they live in a city that has been the host to the Winter Games and also the host to an event in the Summer Games," he said.

The pandemic has severely disrupted test events for the Olympics, with several postponed, cancelled or moved abroad.

This week's Diving World Cup, which doubles as an Olympic qualifier, is taking place behind closed doors in Tokyo.

Olympics organisers are yet to decide how many fans -- if any -- will be allowed at the Games, with overseas spectators already barred from attending.