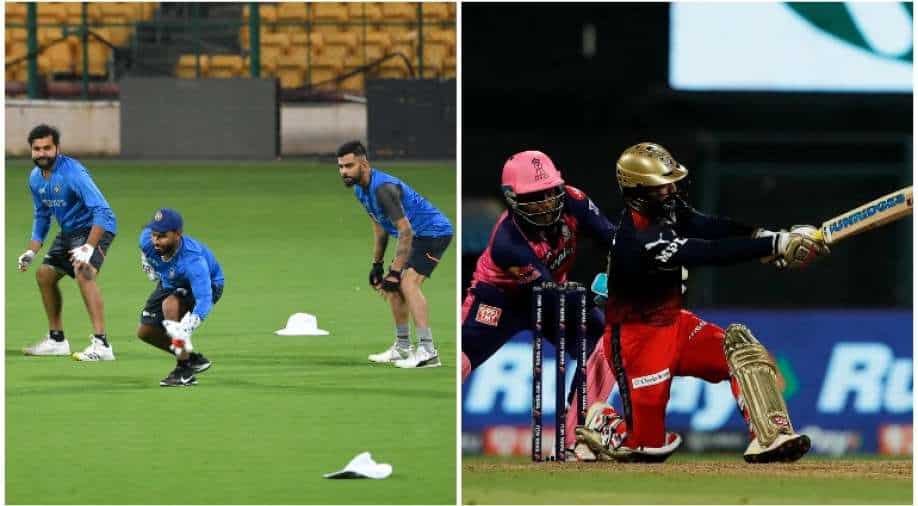 While Rishabh Pant has become a regular across formats for India, Shaun Pollock feels the experienced finisher Dinesh Karthik can give the former a tough run for a place in the 2022 T20 World Cup, to be held in Australia later this year.

Dinesh Karthik has made heads turn so far in IPL 2022 edition. After three games for the Royal Challengers Bangalore (RCB), the veteran keeper-batter is yet to be dismissed and has scores of 32* (14), 14* (7) and a match-winning 44* (23) versus Rajasthan Royals (RR), which led to a stunning six-wicket win for Bengaluru over the table-toppers on Tuesday evening (April 05).

Karthik came out to bat for RCB with the score 87 for 5 in the three-time runners-up's 170-run chase versus RR. The 36-year-old got going from the word go and showed his wide range of shots and composure to stitch a match-winning 67-run sixth-wicket stand with Shahbaz Ahmed (45) to take RCB home in the last over of the contest.

With Karthik being in the form of his life at the moment, former South Africa captain Shaun Pollock has made a bold claim. While Rishabh Pant has become a regular across formats for India, Pollock feels the experienced finisher DK can give the former a tough run for a place in the 2022 T20 World Cup, to be held in Australia later this year.

"Yeah, the way he is playing now, if this form continues, it is a headache for people at the backend. The only issue he has got is that Rishabh Pant will be the man with the gloves. If his batting is good enough, you never know. Just give him the role and use him on the field,” Pollock said on Cricbuzz.

Pollock added, “But I don't think even he (DK) would want to discuss this at this stage. He would focus on each game, making sure he does his best. But if he performs like this, form wise, he will definitely have his name ahead."

ALSO READ | When he does well, I feel proud: MSK Prasad names India player whose success elates him

While Pollock hasn't meant that DK will be a clear favourite over Pant, the former can turn the tides in his favour -- to at least feature as a finisher -- for the one-time T20 WC champions India, who were eliminated in the Super 12 round in last year's edition.

DK will be eager to carry on in a similar stead and take RCB to more glory in the 15th season of the IPL. Currently, they occupy the sixth position in the points table after two wins from their opening three encounters.