'Difference between..': Virat Kohli's old tweet goes viral after he pulls off a sensational catch against DC 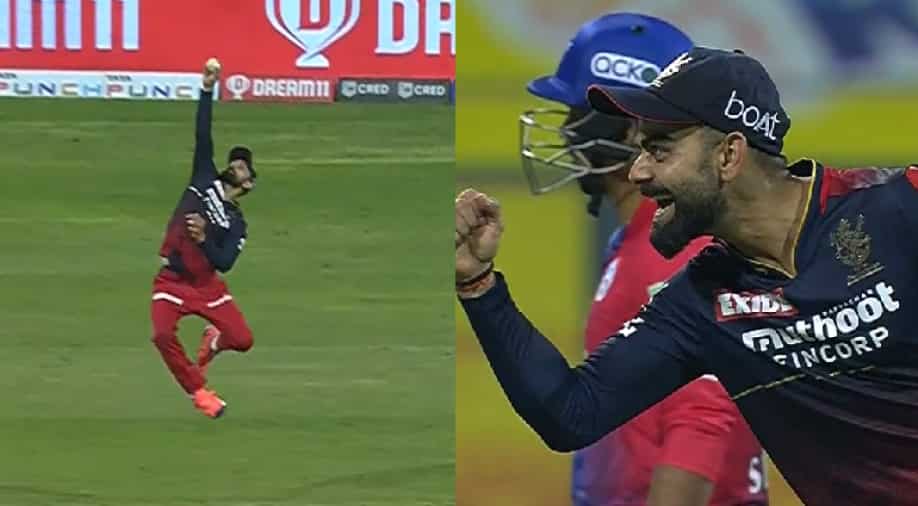 Royal Challengers Bangalore (RCB) superstar Virat Kohli plucked an absolute stunner to send Rishabh Pant packing in his side's clash against Delhi Capitals (DC) in the ongoing IPL 2022 on Saturday. One of Kohli's old tweets has gone viral after his exceptional grab.

Royal Challengers Bangalore (RCB) bounced back to winning ways in the ongoing Indian Premier League (IPL) 2022 on Saturday (April 16) as they defeated Delhi Capitals (DC) by 16 runs at the Wankhede Stadium in Mumbai. Dinesh Karthik and Josh Hazlewood turned out to be the heroes for RCB as their respective contributions with the bat and the ball propelled Faf du Plessis & Co. to their fourth win of the season.

While Karthik played a sensational knock of 34-ball 66 laced with five sixes to help RCB post a big total of 189 runs on the board after a top-order collapse, Hazlewood was the pick of the bowlers as he finished with 3/28 off his four overs to help his side restrict DC on 173/7 in 20 overs.

Run machine Virat Kohli failed to notch up a big knock once again as he was run out after a stellar effort from Lalit Yadav. However, Kohli stole the show with a stunning catch during DC's run-chase at the Wankhede. The former RCB skipper timed his jump to perfection to pull off a brilliant one-handed catch to send Rishabh Pant packing.

On the third ball of the 17th over of DC's innings, RCB pacer Mohammed Siraj bowled a full-toss against Pant, who failed to time it well as the ball flew towards Kohli, who was fielding inside the circle. Kohli jumped in the air and plucked one out of thin air with his right hand.

Virat plucks a mango out of thin air @imVkohli pic.twitter.com/mL4aCk0uwh

After his exceptional catch, one of Kohli's old tweets went viral on social media. In the tweet, Kohli had spoken about the importance of training and fitness in improving the performance of an athlete. The RCB superstar said the difference between a good catch and a good effort is the hard work put in training by the player.

In his tweet, Kohli had also thanked RCB's strength and conditioning coach Shanker Basu. "The difference between a good attempt and a good catch is the work you do in the gym – shankar basu. Thanks for imbibing the “get better by 1 percent” attitude in me bassa sirrrr @basu2013," Kohli had said in his tweet which went viral after his brilliant catch against DC on Saturday.

The difference between a good attempt and a good catch is the work you do in the gym - shankar basu. Thanks for imbibing the "get better by 1 percent" attitude in me bassa sirrrr @basu2013 @Primal_Patterns pic.twitter.com/5IGxuXBaZm

After putting up a total of 189 runs on the board, RCB bowlers struggled against DC openers Prithvi Shaw and David Warner in the Powerplay as the duo put on a 50-run stand for the first wicket. Warner went on to notch up 66 off just 38 balls as he added another 44 runs for the second wicket with Mitchell Marsh, who struggled to middle the ball and could only manage 14 off 24 balls.

DC's batting derailed after Warner's dismissal as cameos from skipper Rishabh Pant (34) and Shardul Thakur (17) didn't prove enough to get them over the line in the 190-run chase. RCB have now moved to the third spot on the points table with their 4th win of the season.