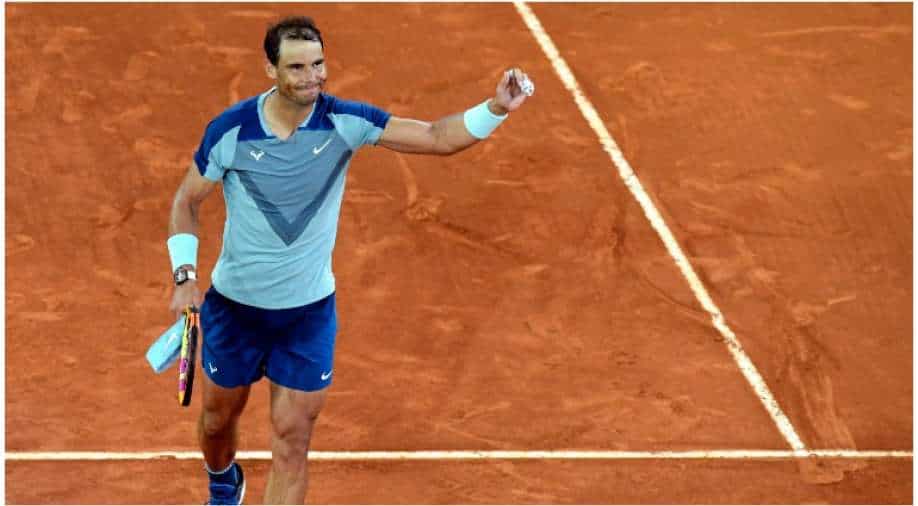 Nadal, who returned from a rib injury this month and fell at the quarter-final hurdle in Madrid last week, dominated Isner who struggled to find answers once the Spaniard, seeking his 11th title at Rome`s Foro Italico, hit his stride.

Nadal, who returned from a rib injury this month and fell at the quarter-final hurdle in Madrid last week, dominated Isner who struggled to find answers once the Spaniard, seeking his 11th title at Rome`s Foro Italico, hit his stride.

Isner leads the ATP Tour with over 450 aces in 2022 but Nadal negated the American`s booming serve by receiving from well behind the baseline -- even on his second serve -- breaking four times and restricting him to just one ace in the match.

The match went with serve in the opening set and Isner squandered two break points at 3-3, before Nadal stepped up his game and broke in the next game after a lapse in concentration from the towering American.
"The beginning of the match was not good for me and even he had some chances on the return to break. I was in his hands at that moment," Nadal said in a post-match interview.

"Lucky that he missed those couple of shots. Then I was able to break and then the match changed."
The second set was no contest as Nadal broke in the opening game to set the tone and he did not look back as Isner ran out of gas. Nadal will play Denis Shapovalov in the next round, against whom he saved two match points in the third round last year en route to his 10th title.

"Last year was a joke, that match I saved here against him. I know how dangerous he is," Nadal added.
"I need to play well, of course, I need to play better than today. But it`s another victory and now tomorrow again a chance to play against one of the best players of the world." Tsitsipas scraped past Grigor Dimitrov with a 6-3 5-7 7-6(4) win but he was made to toil after the Bulgarian suddenly found his groove in the second set.

Dimitrov broke to love when Tsitsipas was serving for the match and won four straight games to take it to a third set. Dimitrov earned match points at 5-4 and 6-5 in the decider but the Greek fourth seed saved both and forced a tiebreak, where he raced to a 5-0 lead before sealing his progress.

"Incredible fight, I`m extremely happy I was able to overcome this obstacle," Tsitsipas said. "Grigor played really well, gave me a hard time on the court. "The fact that I was able to process all of that and come back stronger in the third set tiebreak, it was such a great way to redeem myself." Second seed Alexander Zverev, who lost in the final in Madrid at the weekend, also advanced to the last-16 after he dispatched Argentine Sebastian Baez 7-6(6) 6-3.