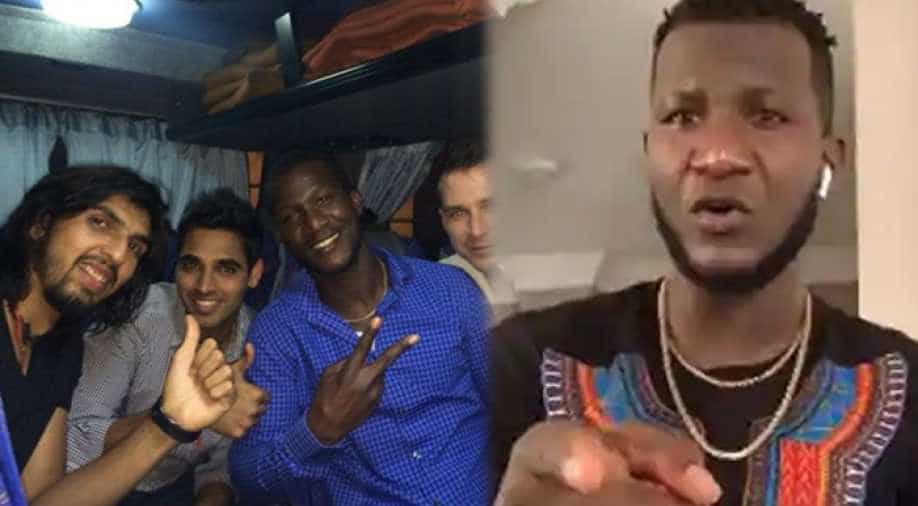 Former West Indies captain Daren Sammy has revealed that he was subjected to racial comments during his stay with Sunrisers Hyderabad in the Indian Premier League (IPL). Since then, an Ishant Sharma photograph on Instagram has confirmed Sammy's claims.

Former West Indies captain Daren Sammy has revealed that he was subjected to racial comments during his stay with Sunrisers Hyderabad in the Indian Premier League (IPL). Sammy now has asked the individuals, who used to call him by that “derogatory word”, to come out and answer his questions before he starts calling out names in public.
Sammy took to social media platform Instagram to post a video in which he explained his feelings when he understood the word he was called in the SRH dressing room.

“I have played all over the world and I have been loved by many people, I have embraced all dressing rooms where I have played, so I was listening to Hasan Minhaj as to how some of the people in his culture describe black people,” Sammy said in a video posted on his Instagram account.

“Knowledge is power. So recently I discovered a word that I was being called was not what it actually meant I need some answers. So before I start calling out names I need these individuals to reach out and please tell me there’s another meaning to that word and when I was being called it, it was all in love #blackandproud #blackandconfident #clarasboy #saynotoracism #stopracism #cricketer #stlucia,” Sammy captioned the video.

ALSO READ: Lewis Hamilton backs anti-racism protestors who threw Edward Colston's statue in the river, says 'he must not be celebrated'

So recently I discovered a word that I was being called was not what it actually meant I need some answers. So before I start calling out names I need these individuals to reach out and please tell me there’s another meaning to that word and when I was being called it,it was all in love. #blackandproud #blackandconfident #clarasboy #saynotoracism #stopracism #cricketer #stlucia

In the video, Sammy revealed how angry he was after finding out the meaning of the word which was degrading him and the black community.

“This does not apply to all people, so after I found out a meaning of a certain word, I had said I was angry on finding out the meaning and it was degrading, instantly I remembered when I played for Sunrisers Hyderabad, I was being called exactly the same word which is degrading to us black people,” he said.

Sammy, who played for Sunrisers Hyderabad in 2013 and 2014 editions of the IPL, cleared out that he didn’t know the meaning of the word and his teammates used to laugh every time after calling him by the name. He added that he thought it must be something fun as everyone was laughing.

ALSO READ: England vs West Indies: Windies arrive in Manchester as all players test negative; series to start from July 8

“I will be messaging those people, you guys know who you are, I must admit at that time when I was being called as that word I thought the word meant strong stallion or whatever it is, I did not know what it meant, every time I was called with that word, there was laughter at that moment, I thought teammates are laughing so it must be something funny,” Sammy said.

. @ICC and all the other boards are you guys not seeing what’s happening to ppl like me? Are you not gonna speak against the social injustice against my kind. This is not only about America. This happens everyday #BlackLivesMatter now is not the time to be silent. I wanna hear u

“Now, I realise it was degrading, I will be texting you guys and I will ask you as to when you called me with that name, did you all mean it in any bad way or form? I have had great memories in all my dressing rooms, so all those who used to you call me with that word, think about it, let’s have a conversation, if it was in a bad way then I would be really disappointed,” he added.

Interestingly, Netizens dug out some old screenshots from social media activities of the players in past where veteran Indian seamer Ishant Sharma is seen with Bhuvneshwar Kumar, Sammy and Dale Steyn as the lanky seamer captioned the image: “Me, bhuvi, kaluu and gun sunrisers”. The post by Ishant confirms Sammy's claims that he was subjected to racial comment while he was playing for SRH in IPL.

Just to confirm it, i did a recheck. Sadly its true. pic.twitter.com/Oz75DzPMWM

Daren Sammy calls out potential racism during his time with the Sunrisers Hyderabad
Kalu
https://t.co/4YbJmK3Zhw pic.twitter.com/c0carhESgz

This created quite an uproar on social media with many fans asking the BCCI to take a note of the situation.

Unbelievable that players at this level indulge in this level of racism. I mean he said they use to laugh after addressing him with the racist slur. I hope the BCCI takes note and players involved are punished. Also a bit surprised that Sammy never googled his nickname.

With anti-racism protests being held all over the world and many elite sportspersons joining the march worldwide, it is to be seen how BCCI, SRH and IPL respond.