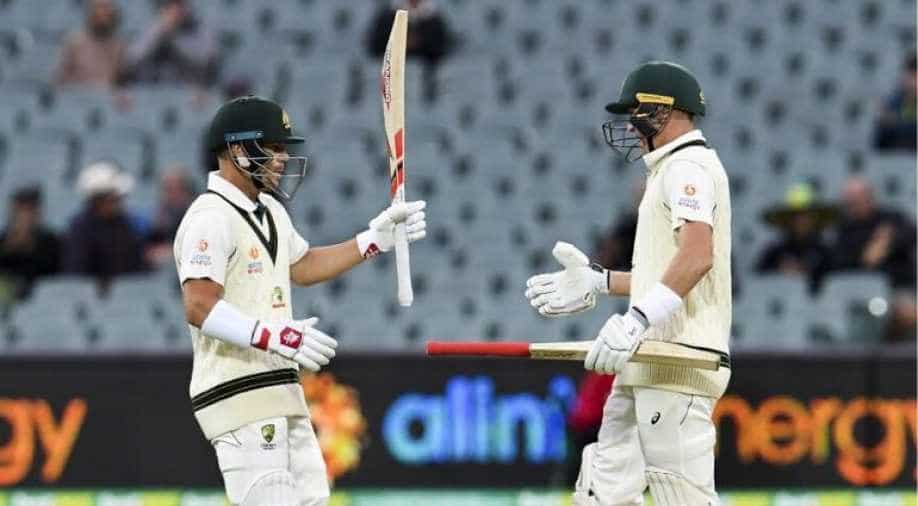 Australia's David Warner (L) is congratulated by teammate Marnus Labuschagne (R) after scoring his fifty against the Pakistan bowling on the first day of the second cricket Test match in Adelaide on November 29, 2019. Photograph:( AFP )

Pakistan need to win to square the two-match series, but the odds are heavily stacked against them, having lost 13 consecutive Tests in Australia.

David Warner and Marnus Labuschagne steered Australia to 70 for one in the opening session of the day-night second Test against Pakistan in Adelaide Friday, justifying skipper Tim Paine's decision to bat first.

On an overcast afternoon and with the floodlights on from the first ball, Warner was not out 45 and Labuschagne on 18 in ominous signs for the visitors, after the pair both made centuries in the first Test in Brisbane.

Pakistan need to win to square the two-match series, but the odds are heavily stacked against them, having lost 13 consecutive Tests in Australia.

Over the years, taking wickets in Australia has been a challenge for Pakistan and they shuffled their bowling attack for the pink-ball Test.

Veteran seamer Mohammad Abbas, who tormented Australia when he took 17 wickets in two Tests in the UAE last October, returned in place of Imran Khan while 16-year-old pace sensation Naseem Shah was rested.

That meant a debut for 19-year-old medium-fast right-armer Muhammad Musa, but it was Shaheen Afridi who stood out and gave Pakistan early hope by snaring Joe Burns.

With the ball moving off the seam, the opener got an edge to Mohammad Rizwan behind the stumps and was out for four.

That only brought Labuschagne to the crease.

He made 185 in the first Test and Warner 154, with the pair putting their heads down to grind out runs, picking off loose balls to keep the scoreboard ticking over.

Warner smacked eight fours, with Musa mostly on the receiving end, as he neared a 31st Test half-century.

But the economical Afridi made it tough going, getting the ball to swing and seam before the teams left the field five minutes early due to drizzle.